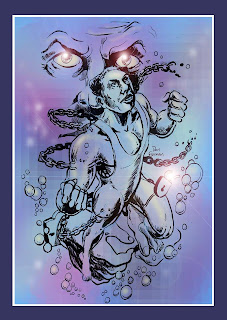 Frank Eachus Publishing and the Houdini Museum in Scranton have released their full set of Houdini: The World's First Superhero trading cards. While there have been individual Houdini trading cards in the past, this is the first full set of cards devoted to Houdini that I'm aware of.

The official set contains 45 base cards, including cards with unique Houdini artwork such as the illustration by Dan Gorman on the right. Sets also include select promo cards and special autograph cards.

At the moment, Eachus Publishing is offering via their website 100 special sets that include the full base set, one of three promo cards, all autographed cards -- including the special autograph card from Jeffery Blood, Houdini's grand-nephew -- and cover cards autographed by the publisher.

The set was officially launched on Halloween at the Houdini Museum in Scranton.