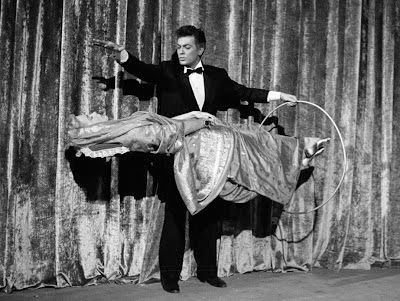 There's a moment in Paramount's 1953 Houdini biopic when we see Harry (Tony Curtis) doing a classic levitation with Bess (Janet Leigh). The levitation is one of the most iconic tricks in all of magic, so of course the filmmakers wanted to include a shot of Houdini performing the effect. The image even made the poster. Trouble is, there is no record (that I can find) of Houdini ever doing a levitation, so I've always chocked this up to just another fictional embellishment of the film.

But now it looks like the Curtis movie had it right (without knowing it). Turns out Houdini did indeed perform a traditional levitation with Bess early in his career. This fresh revelation comes from the new book, The Metamorphosis: The Apprenticeship of Harry Houdini by Bruce MacNab (see, I told you this book rewrites Houdini history). 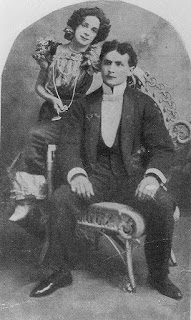 When Harry and Bess set out as part of the Marco Magic Company's tour of the Canadian Maritimes in 1896 (the subject of Bruce's book), one of the headline effects of the show was a levitation. At the time, it was fashionable to tie-in the levitation with the popular novel Trilby by George du Maurier (as Alexander Herrmann had done). Onstage "Marco", aka Edward James Dooley, played the part of Svengali with Bess as his hypnotic subject, Trilby. Bess/Trilby would be laid on a plank across two chairs. On Marco/Svengali's command, the chairs would be removed and Bess with remain suspended in mid air. It's possible Houdini, who doubled as an assistant in the troop, might have operated the complex levitation apparatus behind the scenes.

But when the Marco show failed and folded and Dooley went home to the U.S., Harry and Bess continued the tour with their own act. Many of Marco's props had been confiscated for non-payment of bills, but somehow Houdini was able to salvage a few pieces of equipment, including his own Metamorphosis trunk and the Trilby levitation.

So when The Houdinis performed their act in several Maritime cities, along with handcuff escapes and Metamorphosis, audiences saw "Mysterious Harry" and "Le Petite Bessie" doing a classic Trilby levitation as part of their show. In fact, a review of The Houdinis act at the Moncton Opera House singled out the effect for praise:

"Trilby, or the mystery of Mahomet, in which a human being actually floats in space without any visible means of support, was one of the startling features of last night's evening's performance."


But it looks like the levitation would be unique to Harry and Bessie's Canadian adventure. When they booked passage home abroad the steamship S.S. Yarmouth, they couldn't even afford the price of a ticket for themselves, let alone heavy cargo. The Metamorphosis trunk made the trip, but it appears the Trilby levitation remained behind in Nova Scotia.

(Interestingly, Howard Thurston patented a "Trilby" levitation in 1927, although I expect Thurston was using a completely new and much more complex method.)

So there we have it. Harry Houdini did indeed perform a traditional levitation with Bess, if only for a short time. So now the question remains -- what ever happened to Houdini's levitation apparatus? Also, how awesome would it be if we could find a photo of the young Harry and Bess performing the effect...just like Tony and Janet 57 years later.

Bruce MacNab's The Metamorphosis: The Apprenticeship of Harry Houdini can be purchased on Amazon.com or direct from Goose Lane Editions. For more about the history of the levitation illusion, enjoy this episode of the BBC documentary, History of Magic.

UPDATE: Houdini's Trilby levitation is mentioned on page 1 of Houdini The Key by Patrick Culliton. So it's Patrick -- who also wrote the forward to Bruce's book -- who deserves the credit for first bringing this information to light.

UPDATE 2: Eric Fry reminds me that Houdini put the secret of the Trilby levitation up for sale in his 1898 magic catalog, Magic Made Easy. Price: $1.00


UPDATE 3: Want to see a photo of Houdini doing a levitation? Here you go.
Written by John Cox at 11:25 AM