With Genii back to full health and going strong in the 21st century, Houdini would again appear on the cover of the December 2006 issue...kinda. That's because during this time Genii was doing a double cover -- one cover image and then a loose wrap that created a second cover image. "100 Years of S.S. Adams" graced the "real" cover of this issue with Houdini being the wrap. But it was still, technically, a Houdini cover. Certainly I'm counting it in our series. And because the wrap is only loosely attached, this could prove over time to be the hardest Genii-Houdini cover to find. 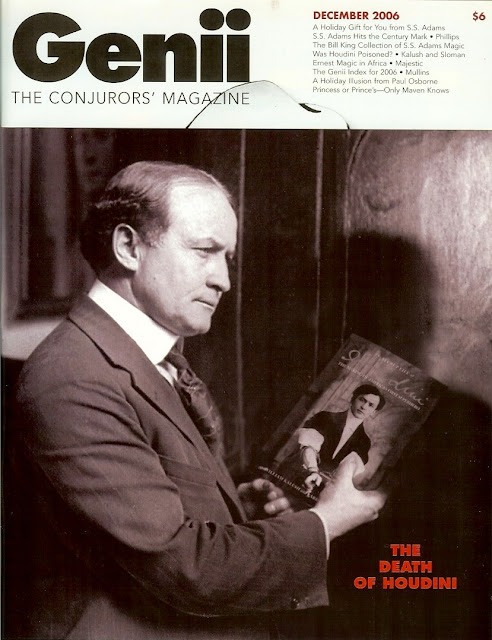 This issue includes a nine page excerpt from the new book The Secret Life of Houdini by Bill Kalush. Titled "The Death of Houdini" the excerpt covers, you guessed it, the death of Houdini! It's illustrated with some terrific photos from the book from the collections of Dr. Bruce Averbrook, Ken Trombly, and Roger Dryer. It also includes a photo of Houdini emerging from a safe that is credited to me (hey, I made Genii!). However, this is a mistake that was corrected in the paperback edition of the book. The photo should be credited to Joseph Holland. 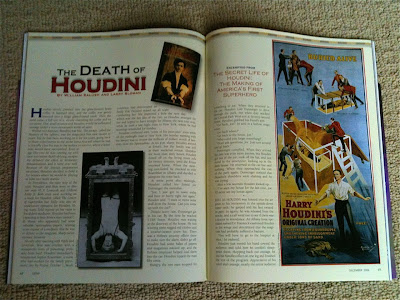 The photoshopped cover image, in which Houdini appears to be holding a copy of Secret Life, was created by Elizabeth Kaufman, art director and wife of editor Richard Kaufman. Having made Genii his own (and a beautiful magazine at that), Richard continues Genii's love-hate relationship with Houdini, writing in his Genii Speaks column:

"Perhaps we should rename Houdini "The Man Who Will Never Die," because the bastard just won't allow himself to be forgotten even 80 years after his death on Halloween, 1926, at age 52."


Indeed, there's no escaping Houdini. And there was still one last spectacular Genii-Houdini cover to come.


Click here for a complete list of all the Genii-Houdini cover issues.
Written by John Cox at 8:05 AM