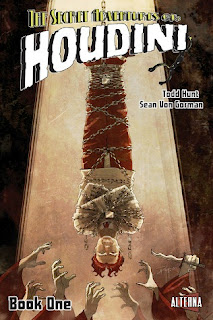 Even though the official release date is still November 21, Alterna Comics updated edition of The Secret Adventures of Houdini by Todd Hunt and Sean Von Gorman is in stock now at Amazon.com.

The Secret Adventures of Houdini was first released as an indie comic in December 2011. This new edition of Book One adds new material that broadens the scope of the story and introduces Sir Arthur Conan Doyle into the series. It also features beautiful new cover art by Michael Jared DiMotta.

For more information on the series visit the official Secret Adventures of Houdini website. To read a review of the book by Dan Robinson head on over to The Magic Detective.
Written by John Cox at 6:05 AM