It appears there is a serious conflict brewing about the upkeep of Houdini's grave in Machpelah Cemetery in Queens. Here is the full article from The Huffington Post: 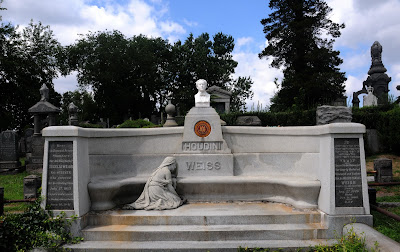 Harry Houdini, who escaped from sealed coffins during his life, can't seem to find eternal peace inside one.

The final resting place of the master escape artist in Queens, N.Y., is hallowed ground to fans. But it's disputed territory for groups claiming a piece of Houdini's legacy and cemetery managers who mistrust others' intentions for the showman's burial spot.

Machpelah Cemetery's most famous resident once attracted so many visitors for an annual seance on Halloween -- the anniversary of Houdini's 1926 death -- that officials still close the grounds each Oct. 31 to stop acts of vandalism. Yet it's still a recurring struggle to scrounge up enough cash for upkeep at the Jewish cemetery. Even when the money's on hand, disagreements sprout over how to maintain Houdini's family plot.

It's one such testy standoff that has rankled a group of New York magicians. The local chapter of the Society of American Magicians, of which Houdini was once president, wants to hire a contractor to remove stains and discoloration from the gravestones, limestone benches and U-shaped granite monument.

"The entire grave is horrible," said Richie Magic, president of the society's New York chapter. "This is a grave site that people visit every day. This is not only a magician and an escape artist; this is a celebrity."

A clash with the directors of the Houdini Museum in Scranton, Pa., however, has prevented the society from spending the roughly $1,300 that members lined up for the cleaning.

The magicians turned to the museum because their society has frayed relations with Machpelah's management. Resentments linger over a 1996 New York Times article that reported magicians had accused the cemetery's operator of selling pieces from the graves of Houdini's siblings.

Machpelah's manager, David Jacobson, said the magicians are publicity seekers who have ignored vandalism that occurred around their "broken wand" ritual previously held each Halloween.

The Houdini Museum, on the other hand, has a cordial working relationship with Machpelah. Magic (he legally changed his last name years ago) and a colleague hoped the museum's directors would vouch for them, but museum officials told them Jacobson shot down their request. "These conversations have opened up old wounds that we had hoped had begun to be laid to rest," wrote museum directors Dorothy Dietrich and Dick Brookz in a July email sent to Magic and others. "There is much bad blood here that seems impossible to overcome."

On a recent visit, playing cards, flowers, stones and a wand left by visitors covered the marker for the illusionist, born Erich Weiss. The grass surrounding the graves of Houdini, his parents and other relatives was cut short.

Jeff Blood, a grand nephew of Houdini, told HuffPost in an email that he hasn't seen the site, but believes "it is not in a condition befitting a tourist destination." Though he doesn't contribute to the upkeep, he said, "We'd like to see the gravesite maintained on a regular basis so it looks the same as it did when it was originally constructed."

In a chain of emails with the New York magicians, Brookz and Dietrich come across as sympathetic to Jacobson and the cemetery. Still, they generally agreed that the grave site needed to be touched up and pledged that they'd pay for the work. Although the magicians say they have already raised the necessary funds, the museum officials criticized them for not sharing detailed plans.

"They wanted to go around Jacobson's back, and they wanted our backing," Brookz told The Huffington Post. "They wouldn't even tell us what they wanted to do. No one knew."

His respect for Machpelah's position might be surprising given that last year Brookz and Dietrich orchestrated an unauthorized mission that installed a Houdini bust, replacing one stolen years ago.

The assurances from the Houdini Museum directors that they'll eventually improve the conditions at Houdini's grave don't placate the magicians.

"The museum has said they will take care of it and get it done. But it's my belief that it will never get done," said Magic, who noted that his group has already restored the graves of other icons like Carter the Great, Al Flosso and Houdini's wife, Bess. (She's not interred in Machpelah because she was not Jewish.) "They said there was no rush, because it's been in disrepair for such a long time. It's a rush because, why not get it done? We've got the money now."

The aging cemetery is severely underfunded and eager to find partners to shoulder costs, Jacobson said. He would accept the magicians' proposal, he said, if they would document that they have the necessary insurance coverage, including workers' compensation.

"We live hand to mouth -- there's no question about that," said Jacobson. "Our authority is to protect those who are dead. The cemetery is forever. Businesses come and go. You and I come and go. The cemetery will remain. The sanctity of those grounds is a priority to us."


Distressing stuff. Hopefully this will all get resolved. Feel free to post any additional information in my Comments.