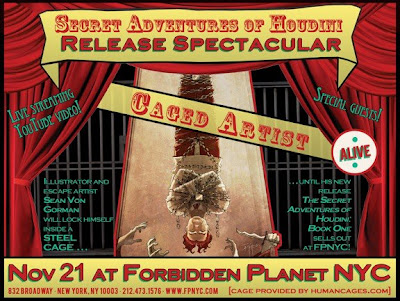 Alterna Comics updated edition of The Secret Adventures of Houdini by Todd Hunt and Sean Von Gorman is officially released tomorrow, and once again artist Sean Von Gorman has come up with a clever publicity to stunt to help promote the book. Tomorrow, November 21, Sean will be locked in a cage at Forbidden Planet in New York and will remain inside the cage until every issue is sold. The event will be live-streamed on Forbidden Planet's YouTube channel.

The Secret Adventures of Houdini was first released as an indie comic in December 2011 (you'll recall that Sean locked himself to a light post to promote that edition). This new edition of Book One adds new material that broadens the scope of the story and introduces Sir Arthur Conan Doyle into the series. It also features beautiful new cover art by Michael Jared DiMotta.