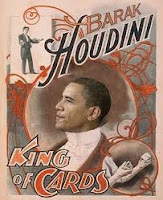 In 2008 part of President Obama's victory was credited to "Houdini", a special get-out-the-vote software that the Obama campaign developed to track Election Day returns electronically. But now The Atlantic reports that Houdini didn't really work as well as expected in '08, so this time the Obama team developed a new, more powerful software with an interesting new name:

"The name of the Obama program that replaced Houdini was Gordon, after J. Gordon Whitehead, the college student who allegedly caused the death of Harry Houdini by repeatedly punching him in the stomach. [...] Gordon did what it was supposed to: It bested Houdini."


Mitt Romney's own "killer" election day software, ORCA, did not work at all.
Written by John Cox at 8:55 AM