Houdini was clearly not a car guy

Joe Fox found this tidbit in the November 1941 issue of Genii. It appeared in "Odd Magical Facts" by Frank Fewins. It's a great slice of life anecdote and yet another example of Houdini's discomfort with automobiles.

This was told to me by Hy Meyer who was there:  One evening during a severe rain storm a group of vaudeville celebrities of the good old days were fining at Reisenwewer's in New York City. [...] All were invited by Al Jolson to attend his opening at the Winter Garden that evening.

A quarter of an hour before show time, with the rain still coming down in torrents, the show folks in the restaurant decided to make the trip to the Winter Garden by taxi, a distance of about eight blocks. As they began pilling [sic] into the cabs, Houdini, who had managed to borrow an umbrella, started to make the trip afoot.  One of the group yelled, "Hey, Harry, aren't you going to ride with us?"

Houdini, with a gesture of his hand replied "I should say not, I'm not going to risk my life in one of those things, not in this weather," and started off with his raised umbrella, arriving at the Winter Garden fairly drenched.

Hy says this incident caused much comment from the group.  It amazed them to think that Houdini, the Ace Dare Devil of them all, feared riding in a taxi on a rainy night. 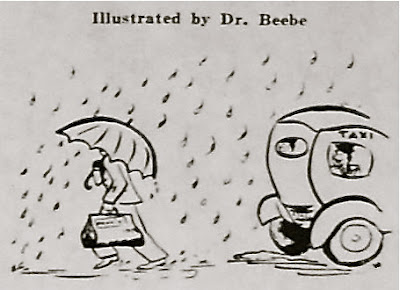 Perhaps this story is yet another example that helps support the provocative theory that Houdini suffered from latent claustrophobia? Or maybe he just understood danger better than most.