A Houdini Milk Can mystery in Studio City 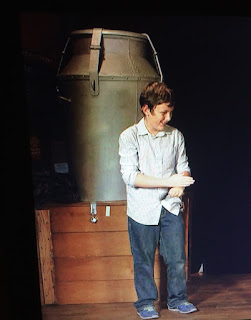 Recently a talented young magician named Riley Siegler ("That Magic Kid") appeared on Penn & Teller Fool Us. While Riley didn't succeed in fooling the great magic duo, he did perplex me. That's because during his introductory video, Riley stood in front of a Milk Can that looked alarmingly familiar.

As you can see from the screen capture (right), the can has a unique design in which bands connect the lid to the body of the Milk Can instead of the neck. This is an imitation of a famous Houdini poster that shows this particular configuration. However, this was an invention for the poster. Houdini's actual Milk Can locked to the neck as do most working cans. But one place a physical Can with this unique configuration did appear was in the 1976 TV movie The Great Houdinis starring Paul Michael Glaser. In scenes shot at the Wilshire Ebel Theater in Los Angeles on April 28, 1976, Glaser performed the Milk Can using what to my eye appears to be this very can!

Turns out Riley's segment was filmed at "The Magic Apple" in Studio City, which just happens to be right down the street from Wild About Harry Headquarters (i.e. my apartment). So I went and had a look for myself. 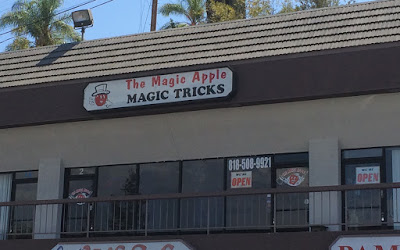 The Magic Apple is a terrific independent magic shop that serves both beginners and professionals and has become a part of the L.A. magic scene. Owner Brent James was there the day I stopped by, and he shared what little history he knew. He said the Milk Can is owned by magician and magic consultant Tony Clark and has "been around forever." It is not a functioning prop; the store rents it out primarily for use in TV and film work. (Brent said they could gaff it for escape, but it would be dangerous and the store could supply a safer can for performance.)

The Magic Apple's Milk Can is surprisingly light weight, as one would expect from a film prop. Brent did not know about any connection to The Great Houdinis, but he agreed that it seemed possible. (I later emailed Tony Clark, but never heard back.)

According to Patrick Culliton, who played Houdini's assistant Franz Kukol during those scenes, Abb Dickson provided the Water Torture Cell and the Milk Can to the production. He says the Milk Can was rigged for escape, but no escape was attempted during the shooting. Glaser was put in the can and taken out. However, the actor did attempt the escape without water.

The Great Houdinis Water Torture Cell reappeared for sale on eBay in 2011. But the Milk Can has been off the radar. The fact that this Can is a movie prop, has the unique cover configuration, and has been around for a long as most can remember had me convinced that I had found the Milk Can used in The Great Houdinis. 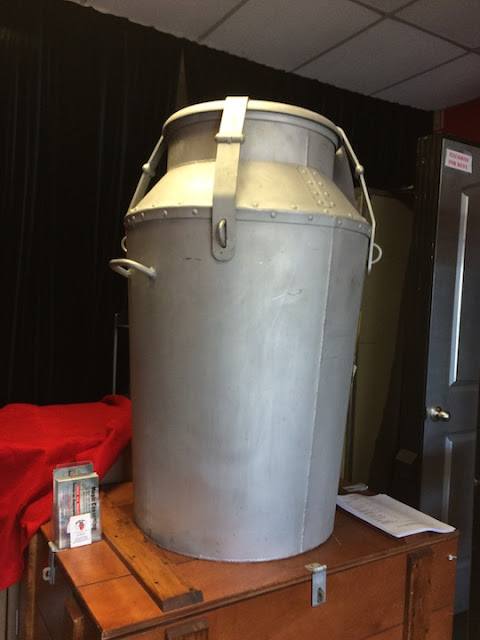 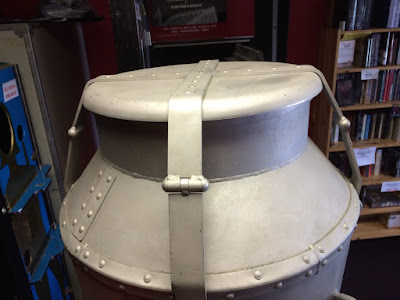 However, when I returned home, I looked at the film closely and saw something that deflated me a bit. While the Milk Can in the movie and the Magic Apple Can share all the same key characteristics, I noticed that the Milk Can in the movie clearly has more rivets on the shoulders. The Movie Can also has a line of rivets running down the side that are not on the Magic Apple Can.

Now, it's possible the production dressed their can with more rivets for effect. Recall they added a false front to the Water Torture Cell. There is a welding seam running down the Magic Apple Can exactly where we see the line of rivets on the Movie Can so, again, maybe placed for effect or to conceal the seam. It's also possible false rivets were an original feature of the Magic Apple Can, but may have fallen off over the years. But the discrepancy in rivets knocks this down from being a certainty in my mind to just a possibility.


Nevertheless, it is an exciting possibility, and if this is The Great Houdinis Milk Can, it's great to see that it's still in excellent condition. It's also nice that we now have a fix on two Houdini movie Milk Cans. The Can used by Tony Curtis in a cut scene in Houdini (1953) sits today in the Houdini Seance Room at The Magic Castle, just a few miles away from The Magic Apple.

Below is a clip from The Great Houdinis showing the Milk Can escape. This was the very first scene shot for the movie. Watch for Patrick Culliton playing Franz Kukol.