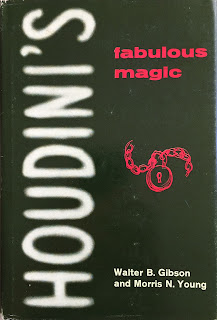 Houdini's Fabulous Magic by Walter B. Gibson and Morris N. Young is the best forgotten Houdini book. I say that because when one thinks of books on Houdini's methods, one tends to turn to Houdini The Key by Patrick Culliton, The Secrets of Houdini by J.C. Cannel, or even Gibson's earlier work, Houdini's Escapes and Magic. Maybe because Fabulous Magic contains some reprinted material from the earlier Gibson book it tends to be thought of as a somewhat recycled work. But it's actually one of the very best books on Houdini's major feats and methods and maybe the best book for the layperson. It also contains historical tidbits that aren't found elsewhere. So let's remember it today!

Walter B. Gibson and Dr. Morris Young make an excellent team. Gibson knew Houdini and Young had one of the best Houdini and magic collections in the world (it's now in the Library of Congress). So Houdini's Fabulous Magic is packed with rare images on almost every page. It was certainly the best illustrated Houdini book up to that time. Also, for me, it feels like Gibson is finally willing to part with secrets that he had kept to himself – or at least out of print – for years.

The chapters on Houdini's challenge handcuff act and jail escapes are among the best, offering a whole host of clever methods that Houdini employed beyond the "key in a kiss." A clue to why these chapters are especially strong might be found in the acknowledgements:

Reminiscences of early Houdini days were personally provided by Lewis Goldstein, only living member of the Houdini show during the Handcuff Era of the early 1900s. Goldstein also worked with the Hardeen company during that same period, and the authors appreciate his first-hand recollections.


Goldstein is likely the source of the following story of a jail escape. It's not something I've read elsewhere, and I love how it shows that Houdini and Hardeen could work together spontaneously:

On one occasion, Houdini went to look over a jail cell accompanied by his brother Hardeen. The lock was formidable, but of the spring latch type. While the police chief was asking Houdini why he didn't try to make the escape then and there, Houdini suddenly decided that he would.

Houdini whispered a quick word to Hardeen and while Houdini was being searched, Hardeen pulled a sheet of paper from a notebook, wadded it tightly, and edged close enough to the door to jam the wad into the latch socket. Houdini was put into the cell naked, keyless, and presumably defeated; but the police chief and the jailer had scarcely turned away before they heard the door clang again behind them and there was Houdini free!


Houdini's Fabulous Magic also includes a final chapter "About Houdini" which features autobiographical excerpts by the great magician himself. And while the book has a very good chapter on the Water Torture Cell, it doesn't reveal the method. Some secrets should be kept.

Houdini's Fabulous Magic was first published in hardcover in 1961 by Chilton Book Company. The cover art has Houdini's name running vertically down a dark green background, somewhat recalling a spirit slate. As far as I know, it was only published in the United States. The book went through at least five hardcover printings with the same dust jacket artwork (I have a 5th dated August 1968).

The one and only paperback edition (that I know of) was published by Barns & Noble Books in 1977.


Houdini's Fabulous Magic would benefit from the great Houdini renaissance of the mid 1970s. The book was reprinted in a new hardcover by Bell Publishing. This time the jacket featured the famous image of Houdini in handcuffs (dated 1903 in the book itself) against an orange background. The copyright page only references the 1961 edition, but it appears this hardcover might have been released in October 1976.


Bell later released another hardcover edition with new dust jacket art that added the descriptive: "His own scrapbooks reveal the secrets of 38 major illusions." Once again, the year of publication is unclear because the copyright only references the 1961 edition. But from my own recollection, this grey jacketed edition replaced the orange edition in my local magic shop around 1978.

Houdini's Fabulous Magic long ago vanished from print. But if one is interested in learning Houdini's methods, hunting down one of these old copies would be a fabulous way to do so.


Enjoy these other selections from the WILD ABOUT HARRY bookshelf:
Written by John Cox at 6:58 AM