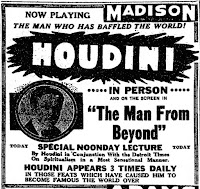 The great Dean Carnegie of Carnegie: Magic Detective has dug in and uncovered some hitherto unknown details about "The Houdini Wonder Show," which Dean correctly points out goes unmentioned in most Houdini biographies.

The Houdini Wonder Show consisted of four traveling magic companies that offered up live shows before screenings of The Man From Beyond (Houdini himself appeared at some locations). Dean has the details and also the stories of the magicians who headed up each of the Wonder Show units.

This is great stuff, so click here or on the headline to have a read at Carnegie: Magic Detective.

Email ThisBlogThis!Share to TwitterShare to FacebookShare to Pinterest
Tags: [History], 1922, Houdini's magic, Links, Other magicians, The Man From Beyond (1922), Vanishing elephant