Here's some new Houdini fiction from author David Khalif. Houdini's Last Trick finds Houdini in action in Hollywood. The book contains illustrations by Francesca Baerald and is part of "The Burdens Trilogy." Here's a description: 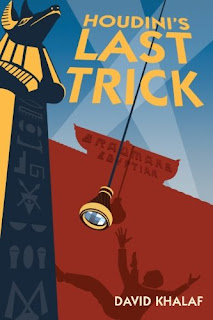 Harry Houdini has a talent unlike any other—and it isn't magic. The world's most famous illusionist has escaped death countless times because of his supernatural ability to see potential outcomes. But his secret talent is about to be revealed.

When a man on the run seeks out the magician for help from a deadly pursuer, the only outcome Houdini sees is death. Even so, he must perform his most dangerous illusion to lure a supernaturally strong man to Hollywood, where he and a band of other uniquely gifted friends can confront him. It's a risky move that will force Houdini to decide who can live and who must die.

An origins story of The Sixteen Burdens, this standalone novella takes place fifteen years before Gray Studebaker finds himself in the middle of the hunt for Newton's Eye. Read Houdini's Last Trick before The Sixteen Burdens to get the full backstory, or wait until after you jump into the full-length novels.


You'll notice the cover art features Grauman's Egyptian Theater. This 1922 Hollywood movie palace was the site of this year's world premiere of The Grim Game. It has also seen screenings of Terror Island and The Man From Beyond.

Purchase Houdini's Last Trick on Amazon.
Written by John Cox at 1:30 AM