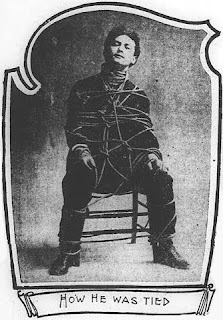 What was I just saying about San Francisco being a hot-bed of Houdini activity these days? Now the San Francisco Silent Film Festival blog has posted the first of a multi-part post by guest blogger Christine U'Ren about, you guessed it, Houdini in San Francisco.

Christine has gone above and beyond in her research and, among other things, has uncovered a terrific full page article from the June 19, 1899 San Francisco Examiner with some images of a roped Houdini by Coover and Rasmussen (who also took this famous shot) that I've never seen before.

Below is the link to part one, which primarily discusses 1899. I will add links to the next installments as they appear at the SF Silent Film Festival blog.

UPDATE: Link to part 2 now added. I'm excited to see it includes a rare photo of Houdini's 1915 overboard box escape in San Francisco Bay from the collection of Dr. Bruce Averbook. This is the only photo of that escape of which I'm aware. I'm also excited to see Christine plans a part 3.

UPDATE: Link to part 3 now added. I very excited to see Christine has uncovered some newspaper clippings from Houdini's suspended straitjacket escape from the Hearst Building.
Written by John Cox at 8:22 AM