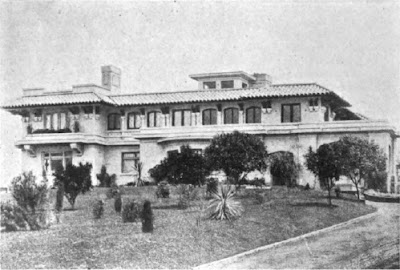 The opening shot of Houdini's The Grim Game is of a house behind tall gates. This is the home of "eccentric millionaire-miser" Dudley Cameron (Thomas Jefferson), and a great deal of action is set at the property. In fact, it's probably the single most used location in the entire film (although interiors were likely shot at the Famous Players-Lasky studio). So where was this all important Grim Game location and is it still around today? 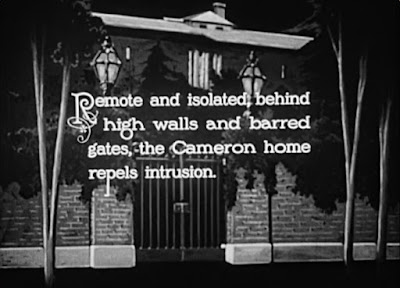 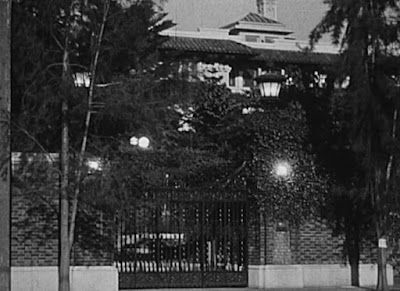 Thanks once again to the amazing detective work of John Bengtson (Silent Locations), we now know this was the Bergstrom estate at 590 N. Vermont at the SE corner of Vermont and Clinton in what is known as East Hollywood. Built in 1906, it was the home of architect George Edwin Bergstrom (who designed The Pentagon) and was considered "one of the showplaces of Southern California." It was also praised for using modern construction materials that would help make it more resistant to earthquakes.

As we see in the film, the gates of the Bergstrom estate were motorized, a novelty in 1919. These gates also featured in the 1920 Buster Keaton comedy Cops (which shares several locations with The Grim Game) and the Snub Pollard-Hal Roach Studio comedy Fresh Paint (1920).

"The grounds comprise nearly five acres, having a frontage on the east side of Vermont Avenue by a depth of 300 feet on Clinton Street. The landscaping effects are elaborate, including a wide sweep of lawn, numerous shaded walks and drives and gardens, both formal and informal. The entire property is surrounded by an ornamental brick wall that is the height of a man's head and which is declared to have cost a small fortune in itself."


The estate was later owned by vaudeville magnate Alexander Pantages. Despite being a competitor to Martin Beck and Houdini's own Orpheum circuit (Hardeen was a Pantages star), Alexander and Houdini were friendly enough to share Thanksgiving dinner in 1915. It's unclear who owned the house at the time of The Grim Game filming in spring 1919, but in 1920, Pantages entered into a partnership with Famous Players-Lasky.

The Bergstrom house was demolished in 1951 to build a Jewish community center, Today it is the site of West Coast University Graduate Studies. It's hardly the idyllic hill top hideaway that it was in Houdini's day. The busy Hollywood Freeway now cuts along the south side of the property. But this makes this all important Grim Game location easy to spot as one passes by. 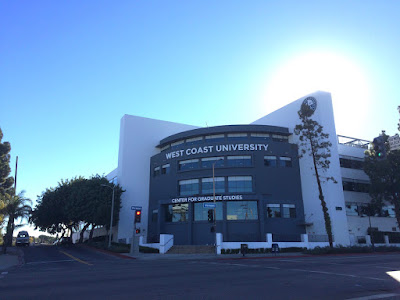 A few Sundays ago, when I visited another Grim Game location, the Cahuenga alley, I went and had a look at the site of the Bergstrom estate. One thing that stood out was a house directly across from it on Clinton Street. Also hidden behind gates, it looks somewhat similar to the Bergstrom estate, so one can catch a bit of a Grim Game vibe from that property. 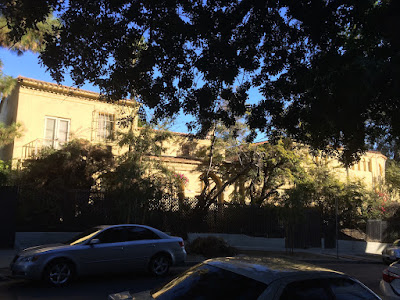 I also traveled down Clinton to N. Juanita Ave where I found a retaining wall that was clearly not part of the modern construction. Maybe its too much to hope that this wall dates back to the Bertstrum estate, but I thought it was worth a photo. 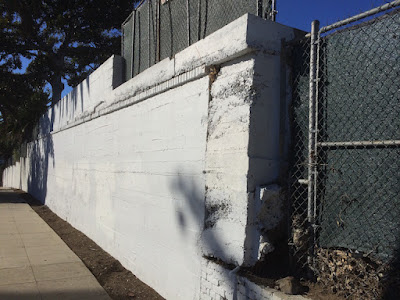 Thanks again to John Bengtson and his website Silent Locations for providing the Houdini and magic world with information we would have never known otherwise. What a great way to end an incredible year of rediscovering Houdini's The Grim Game.