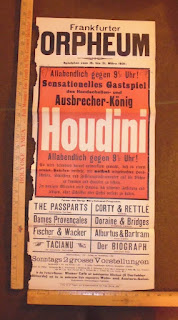 An original broadside for an early appearance of Houdini in Germany sold yesterday on eBay for an impressive $3,049. The auction received 21 bids.

The 25x11 inch ad shows Houdini at the Frankfurt Orpheum, March 16-31, 1901. According to the seller, it was sent to magician C. Charles Dunbar by Houdini and was stored in a scrapbook. This may be the first time this piece has ever appeared on the market. Even the great collector Kevin Connolly commented on his blog, Houdini Himself, that this was something he'd never seen.

Material from Houdini's first European tour is always desirable. The color on this is also very nice. And despite one edge having been chewed off by mice, it's still in pretty good condition. All reasons for the high sale price, I expect.

Congratulations to the winner.
Written by John Cox at 8:37 AM