An exhibition featuring "150 Years of Jewish Magicians" is currently on show at the Congregation Emanu-El in San Francisco. Among the displays are cases devoted to Houdini and Hardeen. Below is a description and details of a special upcoming event on January 20. 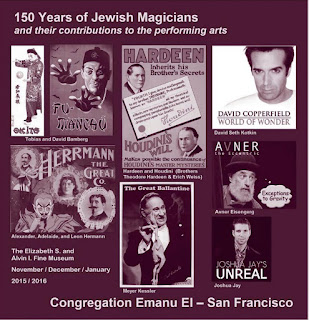 From Victorian to contemporary performers, many magical entertainers have made a lasting impression on the world of performing arts. There were women as well as men who toured the country performing magic. There were families of five and six generations who followed in their magical forefather’s footsteps (the Bamberg and Herrmann families were the magical royal dynasties of their time.) In every past decade there have been performers who became household names. Today large numbers of entertainers including David Copperfield, Ricky Jay, Jami Ian Swiss, David Ben, and the Bay Area's own Jay Alexander practice the art of magic worldwide.

SAVE THE DATE!!
Join us on January 20 from 7:00 to 9:00 pm when the Elizabeth S. and Alvin Fine Museum will sponsor a gala night of historical and contemporary magical entertainment! Guests will take a trip back through time experiencing the wonders of famous Victorian magicians and also be treated to contemporary San Francisco Bay Area performers representing the present and future of Jewish magicians. Do you know about The Great Lafayette? Max Malini? Adelaide Herrmann? These, and possibly Houdini himself (who might make a surprise appearance) are just a few of the samplings from the magicians who will be wowing the audience with their magic!

Please register for this very special event so we know to expect you.


San Francisco has certainly been a hot bed of Houdini activity this year!