Houdini at the Victory

Here's a terrific high resolution image of a Houdini theater display from a post by Amelia Robinson at Seen and Overhead, a blog about Dayton, Ohio. I've never seen this shot before. This is the Victory Theater in Dayton. Houdini played his 3 Shows in One here October 1-4, 1925. 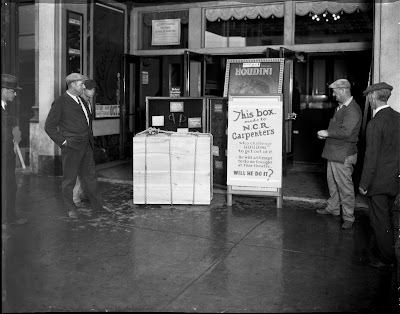 It's interesting to see that challenges are still part of Houdini's full evening show (Act II was escapes). The challenge here is to escape from a packing crate made by "N.C.R. Carpenters," a Dayton-based manufacture of cash registers which still exists today. If you look closely, you can see all the nails around the lid are standing out a few inches for examination.

Behind the challenge board you can see a large lobby stand that's now in the David Copperfield collection. A Houdini's handcuff case display, which I believe is also in the Copperfield collection, stands beside that. But something I don't think is in any collection is a large poster on the left wall showing Houdini's name written in cursive down the length of the poster (you'll need to click and enlarge the image to see it). This appears to be a lost poster.

This Victory Theater still exists. Today it is called the Victoria Theater and is located at 138 N Main Street, Dayton, OH. 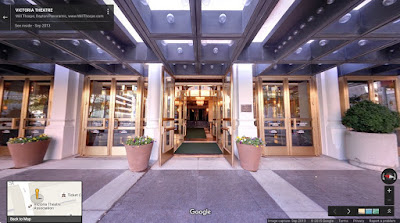 Photo sourced from the NCR Archive at the Montgomery County Historical Society.

UPDATE: I recently came across this nice newspaper story and ad for Houdini engagement at the Victory. Enjoy.