The Picayune Item reports that the Picayune Memorial High School theater group, High Tide Productions, have won the opportunity to compete a Mississippi state drama competition with their production of The Last Illusion, a play about the life of Houdini. 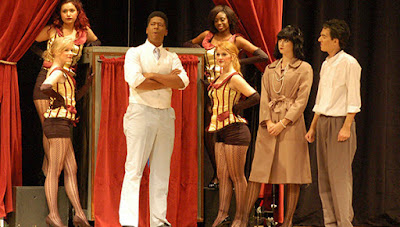 During a regional competition in Hattiesburg last weekend, Katy Fuller won best actress for her portrayal of Bess Houdini.

"I was very surprised," she said. "It was the first big part I've had. It makes me want to do more with the part and get even better. I'm very blessed to have this opportunity and will dig deeper into the character and get more emotional."

"It's cool to be recognized for the hard work we put into it," said Saul. "I’m definitely still working on differentiating between older and younger Houdini to bring that contrast."

Here's wishing the Picayune Memorial High School troop best of luck in the finals!
Written by John Cox at 9:46 AM