The Tony Award winning musical Ragtime has embarked on a new 91-city national tour. Houdini is a character in the play, as he was in the E.L. Doctorow novel from which the musical is based. In this new production Houdini is played by Mark Alpert. 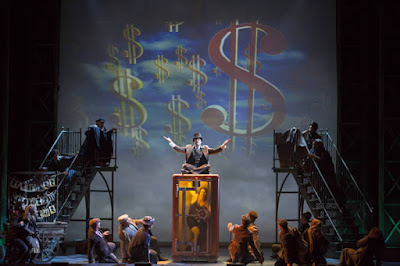 The 2015-16 national tour of Ragtime kicked-off on October 22 at the Phillips Center for the Performing Arts in Gainesville, FL. The tour concludes June 12, 2016 at the Wolf Trap in Vienna, VA. You can see a full tour listing and buy tickets at the Ragtime website.

I'm excited to see Ragtime will be playing at the Fred Kavli Theatre in nearby Thousand Oaks, March 24-27. I've never seen the play, so my plan is to go on Houdini's birthday!

Ragtime made its debut on Broadway in 1998 and ran for 834 performances. It had a short-lived Broadway revival in 2009.