LINK: Written by Houdini Himself!?

Our friend David Saltman at The Houdini File has a post today about "The Amazing Exploits of Houdini," a series that ran from April 1920 to November 1926 in the British weekly, The Kinema Comic. These "exploits" are pure fiction and said to be "Written by Houdini Himself." But David has discovered they were actually ghostwritten by Herbert Allingham. 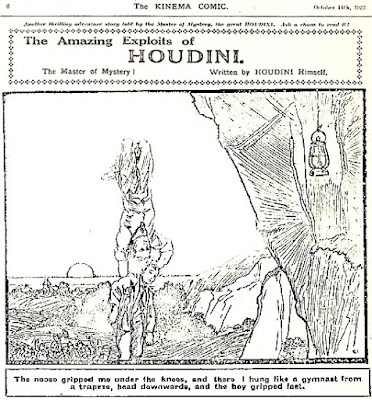 It's interesting to see that Houdini's role as a fictional hero began during his own lifetime. It's a career that's still going strong today. It would be nice to see these early stories collected into a single volume someday.

A complete listing of all the Houdini issues of The Kinema Comic can be found in the recently updated Houdini Periodical Bibliography Reference from 1898-2015 by Arthur Moses, an essential resource.
Written by John Cox at 11:10 AM