The American Museum of Magic in Marshall, Michigan have revealed plans for a special Halloween Houdini seance to mark the 90th anniversary of the great magician's death. Their seance will include nods to the first Houdini seance held at the museum back in 1978. Below is the full press release. 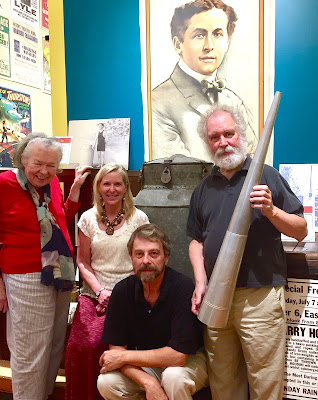 MARSHALL – Halloween will be an especially spooky day at the American Museum of Magic – especially if the ghost of the late magician Harry Houdini makes an appearance.

“Just as we did in 1978, we're going to tempt Houdini to show up by setting up a lox-and-bagel sandwich for him, and locking it inside his own escape apparatus,” said Susan Collins, who chairs the board of directors of the museum at 107 E. Michigan Ave. “We're told that it was his favorite snack, so we're going to make it tough for him to ignore us.”

Shortly after 2 p.m. on the afternoon of Oct. 31, select members of the museum's staff and supporters will sit in a séance circle around artifacts that once belonged to Houdini, and make their second attempt in 38 years to contact his ghost – if it exists. The public is invited to attend and observe the free event, but no children under age 8 will be admitted.

Houdini died at 1:26 p.m. on Halloween Day, Oct. 31, 1926, at Grace Hospital in Detroit, Michigan. Since then, magicians worldwide have celebrated October as “magic month.”

“This year, we'll be under daylight saving time on Halloween Day, and our panel of advisors tells us that – because of the time adjustment – it will be exactly 90 years since the death of Harry Houdini at 2:26 p.m. Eastern Daylight Time,” Collins said.

“When we shifted ahead by an hour last spring for daylight saving time, it put our clocks an hour ahead of Houdini’s time in 1926, and we won't 'fall back' to standard time until the following weekend,” she said. “So, at 2:26 p.m. on Halloween under daylight saving time, we'll hit the actual 90-year mark. That's when we will go silent and call for Houdini to give us a sign.”

The séance itself will be supervised by Marshall magician Phillip Hagerty, following a script prepared by John C. Sherwood, also a Marshall magician. The script will follow the format that the museum's late owner, Robert Lund, established for the 1978 event, which Hagerty and Sherwood attended.

Those who wish to observe should arrive at the museum by 1:45 p.m., Collins added. Sentries will guard the museum's locked doors to prevent unauthorized tomfoolery, and those attending will be invited to inspect the museum for any hidden accomplices. All museum telephones will be rendered silent during the event.

Houdini made no sign of returning in 1978. At the time, Lund said the failure may have been because the bagel he'd provided wasn't kosher. Lund also speculated whether adding cream cheese might have helped.

“We’re going to try to correct some of those oversights this time,” Collins said.

Houdini's late wife Bess frequently spoke of making a compact with her husband that they would attempt to contact each other’s spirit, if it were possible.

“Although she and her husband had become skeptics about the reality of such psychical events, Bess seems to have made several serious attempts to carry out that compact,” Sherwood said. “At one time, she even thought that the medium Arthur Ford had given her the message that she longed to hear, but she later renounced the experience as an error.”

As was done in 1978, the museum will hold its séance-style ceremony around Houdini’s own Milk Can Escape, an artifact acquired by Lund about a half-century ago, and a “spirit horn” once owned by the magician.

“Just as we did before, we plan to place a lox-and-bagel sandwich into or near the Milk Can and ask Houdini to take a bite out of it,” Collins said. “Or maybe he'll just tip it over – or something. We'll settle for any kind of unusual sign.”

Sherwood said Houdini's spirit will be given a variety of opportunities to make its presence known, perhaps by whispering through the spirit horn, extinguishing a candle, or opening a lock or set of handcuffs.

“We'll be able to see precisely what might happen because we're not going to turn off the lights,” Sherwood said. “As Bob Lund described him, Houdini was the enemy of darkness and – in his honor – all the lights will be on, including our brand-new array of track lighting. If anything is going to happen, we'll see it clearly.”

Collins was present for the 1978 séance and will join the circle in place of one of the initial circle-sitters, her late husband, John Collins, a former president of the Michigan Historical Society. Two other members of the 1978 circle will be present again – Sherwood and Norman Kinney of Marshall. A third living member of the 1978 circle, former Marshall resident Douglas Collins (no relation to the other Collinses), will be unable to participate.

Several other individuals are being selected by the museum's staff and board members join the séance circle on Halloween, Susan Collins said.

An empty chair in the circle will honor Lund, and a remembrance candle will be lighted in memory of John Collins as well as three of Lund's now-deceased friends who joined the 1978 circle – Royal Oak television producer Dan Waldron, and District Judge Dale Riker and his wife, Evelyn, both of Flint.

“If anyone has an advantage in bringing Houdini back, we have it at this museum,” said Sherwood, who also is a member of the museum's board of directors. “This is one of the few repositories in the nation that honors Houdini by displaying his own magical equipment, posters and other memorabilia.

“Countless artifacts safeguarded here were owned by Houdini and his friends, and by those who were inspired by him to embark on the hobby and profession of theatrical magic,” he said. “Over the decades, hundreds if not thousands of magicians – famous or not – have visited here to remember Houdini and the other performers who are honored here.”

Sherwood and Hagerty insisted that no magical shenanigans will be permitted during the event.

“You will not experience any trickery, theatrical deception or fraud during this gathering,” Hagerty said. “If anyone plans some form of nonsense, we'll find them out and denounce them.”

“We aren't Spiritualists or ghost hunters, either,” Sherwood said. “We aren't necessarily believers in the claims of those who trust in the spiritual return of the departed. Under no circumstances are we conducting a religious ritual in any way. Instead, this is an experiment — an expression of hopefulness and honor.

“Bess Houdini's seances — and her failure to produce her husband's spirit — actually had a intellectual, logical purpose,” Sherwood said. “After years of investigation and research, she and Houdini had become skeptics about psychic phenomena, and Bess actually believed the séances extended Houdini’s efforts in life — to stop the spread of superstition and unwarranted belief in nonsensical, magical thinking.”

“We simply plan to pay tribute to the most famous magician who ever lived,” said Susan Collins. “At the same time, we'll be honoring the memory of Bob and Elaine Lund, who made this museum possible.”

The museum will open at 10 a.m. that day, and a reception will begin at 1 p.m. Refreshments will be available before and after the séance. The museum itself will remain open until 4 p.m. that day. Additional information about the museum is available by calling (269) 781-7570 or by visiting americanmuseumofmagic.org.

PHOTO: Staff and supporters of the American Museum of Magic in Marshall, Mich., will conduct a 90th anniversary séance on Halloween Day to contact the spirit of magician Harry Houdini, who died in Detroit on Oct. 31, 1926. From left are Susan Collins, who chairs the museum's board of directors; Cindy Lake, the museum's administrator; John C. Sherwood, a museum board member and longtime Marshall magician; and séance supervisor Phillip Hagerty, also a longtime Marshall magician. Items Houdini once owned will be used during the event, including his Milk Can Escape apparatus (at center) and mediumistic “spirit horn.”


For the record, I've never heard of lox-and-bagels being Houdini's "favorite snack." Maybe they should have gone with Farmer's Chop Suey, the dish Houdini had a "hankering for" on his death bed.

The American Museum of Magic will hold several other escape-themed events throughout the month of October.