House of Roulx & Co. is offering limited editions of rare Houdini photos digitally mastered from the original glass negatives. Some are unpublished. Among them is a terrific solo shot of Houdini's dog Charlie. The site says the images are "From the Personal Collection of Harry Houdini." (I recognize them as coming from a 2015 RR auction.)


Click to view the collection at House of Roulx 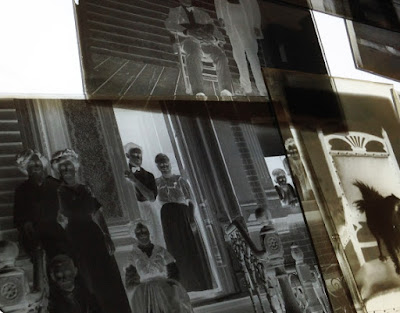 "From slide to slide, his expression remains the same - a furrowed brow. His thoughts not entirely centered in the moment, but fixed on a distant point. On something just outside the periphery. His next journey into the impossible; the upcoming challenge, his mind working, formulating the route from entrapment to escape."

What interesting about this collection is these all appear to be very personal photos. It's probably why these negatives were kept together. We see Houdini among Bess's family, Harry and Bess holding a baby (some have said this is Marie Blood), and, of course, there's Charlie. But the other photos show Houdini with identified older men. Who are they? Important relatives whose identities have been lost to time? Might these have even been taken in Budapest? A bit of a mystery.