The Kaiser and the King of Handcuffs tangle in 2017 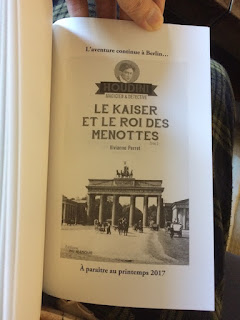 Yesterday I received my copy of Metamorphosis by Vivianne Perret, the first book in a new french series featuring the adventures of "Houdini Magicien et détective." Even though I don't read French, it still makes a nice addition to my shelf of Houdini fiction, and I was excited to see an advert for Book 2 in the back.

Le Kaiser Et Le Roi Des Menottes ("The Kaiser and the King of Handcuffs") finds Harry and Bess in Berlin in 1900. The book will be released in Spring 2017. As I had expected and hoped, this fictional series roots Houdini in historically accurate times and places. I love this approach.

Metamorphosis is available now via the French Amazon.fr and Amazon.co.uk. It will be released on Kindle in the U.S. on November 9.