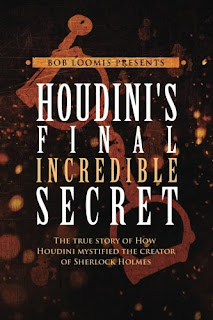 Houdini's Final Incredible Secret by Bob Loomis is a masterclass in the study of Houdini and magic history. It's really one of the most remarkable works ever produced on any single magician. This densely packed 323 page book is about a single magic trick that Houdini performed once. That's it! How can that be a book? Well, imagine spending a week in Houdini's home, getting to know every aspect of his personality and his environment, and then travel with him step by step in the trial and error development of a single perfect magic feat. Yes, that's a book!

The trick that is the focus of Bob's 20 year investigation was performed by Houdini for Sir Arthur Conan Doyle and Bernard M.L. Ernst in his New York home in 1922. Only one description of the trick exists, told by eyewitness Ernst in his 1932 book Houdini and Conan Doyle: The Story of a Strange Friendship (pages 240-245). The trick involved producing the written message "Mene, mene, tekel, upharsin" on a chalk slate suspended in the middle of a room in full view of Doyle and Ernst.

Past books have mentioned the famous feat and some have attempted to explain it, including most recently The Secret Life of Houdini. Bob examines and dismisses all previous explanations, which he shows invent or omit key descriptive information to fit their own theories. Bob assigns himself the task of explaining the trick exactly as described by Ernst.

It's clear that Bob is a researcher par excellence (he was the librarian at the Magic Circle in London). It's also clear he delights in doing research. Bob shares that joy by taking the reader step by step through every bit of his own process with lively prose. It might even be too much process for some. But even if one feels lost at times, there are gold nuggets along every part of the trail, so one never dares jump ahead.

I was especially impressed with Bob's overview of Houdini's character (the good and bad) on pages 67-89. Even if one doesn't want to take this full journey, the first section of the book is required reading for anyone with a desire to better understand Houdini. Gold, gold, gold!

So did Bob solve the mystery of Mene Tekel? Well, he certainly offers an explanation that is technically feasible, and he's backed it up with proof that the methods -- and there are several methods at work -- were all familiar to Houdini. The explanation is not simple or elegant. It requires divergent elements to work perfectly in sync, and the possibility of failure seems remarkably high. Maybe that's why Houdini only performed it once.

One aspect of the explanation that I don't think Bob nailed as well as others is how Houdini acquired the message that Doyle wrote several blocks from Houdini's house. Bob offers several scenarios in which confederates on the street could have gotten a peek at the message. But it just seems high risk for Houdini to leave such an essential part of the trick in the hands of others and chance. It also just seems a little improbable that such a complicated and seemingly nonsensical message could be gotten from a glance or by watching the end of a pencil. And would Houdini really be able to canvas the entire neighborhood with confederates, including policemen? Well, this is Houdini we're talking about, so maybe! 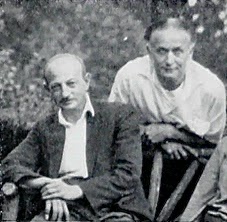 To his great credit, Bob takes Ernst at his word and accepts that Houdini not only had to fool Doyle, but Ernst as well (who remained with Houdini at all times). But I'm not entirely convinced Ernst was an innocent observer. He was Houdini's lawyer and confidant (consigliere?) in all matters. My own feeling is he was in on the trick. This would help explain some things. But there I go twisting the stated facts to fit my own ideas, just as others have done in the past. As I said, Bob doesn't give himself that luxury. As impossible as it all seems, Bob shows us that the impossible was possible.

In the end, whether or not you fully agree with all of Bob's findings, you'll still agree that this is a remarkable book. In Houdini's Final Incredible Secret, Bob Loomis not only teaches us how Houdini did it, but he also gives a lesson in how to research Houdini and magic history in a meticulous and ethical way. It's a book that deserves a standing ovation.