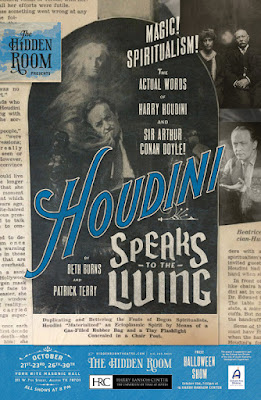 The Hidden Room's production of Houdini Speaks to the Living debuts tonight at 8pm at the York Rite Temple in Austin, Texas. The play runs through October 30. A special free performance will be held at the Harry Ransom Center on Halloween.

Beth recently told the Austin Chronicle: "I've spent so much time with the Ransom Center's incredible collections. I feel like Houdini and Doyle are my roommates now, because I sit with them and look at their correspondence and listen to them bicker. My job was specifically to activate the Houdini collection on the 90th anniversary of his death. And when I found out that Doyle's collection was nearby, we were all set – I've been poring over the documents, and I've learned so much about the two of them."

For more information and to buy tickets visit The Hidden Room website. Below is a promo for the play from the Humanities Media Project.