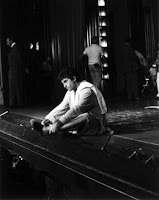 This weekend I'll celebrate the 40th anniversary of The Great Houdinis, the 1976 television biopic starring Paul Michael Glaser and Sally Struthers. I thought I'd kick things off with a flashback to this 2011 post about the making of the movie. This was one of my first big research projects for WILD ABOUT HARRY, so I have a soft spot for it, as I do the film itself. Enjoy.

MAKING THE GREAT HOUDINIS
Written by John Cox at 12:27 PM