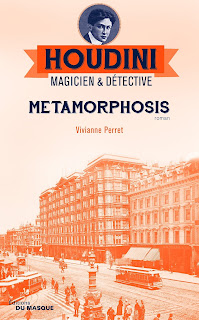 The first in what promises to be a new series of French books featuring the adventues of Houdini as "Magicien et détective" has been released by Le Masque.

Metamorphosis by Vivianne Perret is set in San Francisco in July 1899. In it, Houdini is asked by a rich silk merchant to help find his kidnapped niece, whom he fears has been sold into the brothels in Chinatown. Over Bess's objections, Houdini agrees to investigate. But what Bess doesn't know is that Harry is also on a secret mission for the U.S. government.

Continuing books in the series will follow Houdini to various locations worldwide.

The Houdinis were indeed in San Francisco in July 1899, so I like that this book appears to be a bit more rooted in reality than most Houdini fiction. I'm hoping other books in the series will also place him in historic reality, at least as far a time and place are concerned. I could easily imagine continuing books set in London, Germany, Russia, France and Australia. Fun stuff.

Unfortunately, it appears Metamorphosis is only available in French (for now).

The paperback and eBook are available via the French Amazon.fr and Amazon.co.uk. The Canadian Amazon.ca shows an October 12 release date. There are listings for the eBook only on the U.S. Amazon.com showing a release date of Nov. 9.

UPDATE: Author Vivianne Perret tells me her next book "will place Houdini and Bess in Berlin, at the Wintergarten in October and November 1900." Nice.