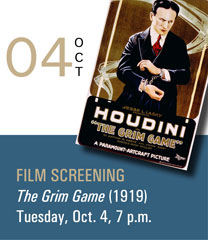 TCMs restoration of Houdini's The Grim Game will screen TONIGHT at the Harry Ransom Center's Charles Nelson Prothro Theater at 7:00 PM. Eric Colleary, Cline Curator of Theater and Performing Arts, will introduce the film. The screening is open to the public and FREE.

The Grim Game is currently the only Houdini movie not available on DVD, so screenings like this are the only way to currently see what is by far Houdini's best film.

The Harry Ransom Center is located at The University of Texas at Austin and holds one of the largest collections of Houdini material in the world. The center is celebrating the 90th anniversary of Houdini's death with several special events this month.

For more information about tonight's screening of The Grim Game CLICK HERE.