The magic collecting community is abuzz today about this "Rare 1925 Post Card Back Stage Pass" currently on eBay. What an amazing find!!! And how secure was Houdini's show that he had to write himself his own backstage pass? Two days left!!! Place your bids!!! Will Copperfield swoop in and snatch this up for a cool million!? 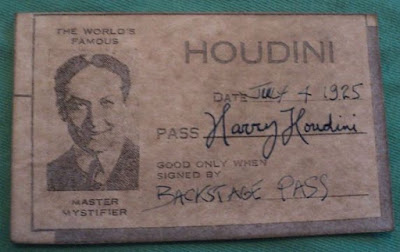 Here's a rare find. Small Postcard dated July 4th 1925. Houdini Backstage Pass signed Harry Houdini. Back has a 1 1/2 cent stamp. Marked on stamp Bay City Michigan. I recently purchased a collection of old books and found this item in one book. Little postcard measures 4 inches long by 2 1/2 inches wide. Average good condition with age yellowing as my pictures show. Rare item. None of these around. USA buyers only. Add $3.00 postage.

Okay, maybe hold off on those bids for a sec. For those of us who have every page of every Houdini book imprinted on our brains, you'll immediately see this was clipped or copied from page 178 of The Original Houdini Scrapbook by Walter B. Gibson. They didn't even clip it properly -- you can still see the page graphics (drop shadow, etc.) around the edges. Below is the image as it appears in the book. 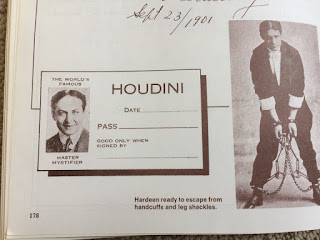 It's not even clear if the pass depicted in the Gibson book was ever actually used by Houdini. Rick Ruhl over at Kevin Connolly's CONJURING HISTORY Facebook group points out that Tabby Crabb mocked up postcards using this image as "a hoax dedicated to Ted Annemann in the name of Max Abrams." So is this a fake of a fake?

The seller claims to have found this in a book and doesn't appear to know anything about Houdini, so this could be innocent enough on their part (the auction currently has one bid). However, it does appear an effort was made to forge Houdini's real signature (note the Hs), so deception did play a part somewhere in history of this one.

I'd pass on this pass.

Thanks to Kevin Connolly and Rick Ruhl. Below are links to a few other recent dubious eBay auctions.

UPDATE: Our great friend and mega collector Arthur Moses provides us with a look at what a real Houdini pass looked like. Thanks Arthur! 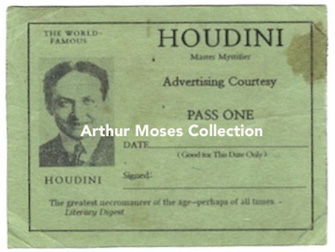