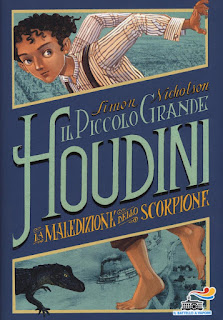 I missed this back in April, but it looks like Simon Nicholson's second Young Houdini novel has been released in Italy with illustrations by artist Iacopo Bruno.

La maledizione dello scorpione is published by Piemme and is available to purchase from the Italian Amazon.it. The book was first published in English as The Demon Curse and is set in New Orleans.

The (wholly fictional) Young Houdini series comprised three books: The Magician's Fire, The Demon Curse and The Silent Assassin. The final book was only released in the UK.