THE HOUDINI-HILLIAR CODE IS REVEALED! 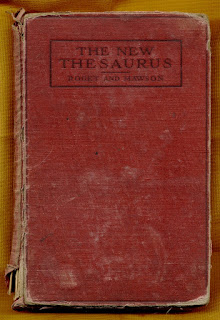 Over the weekend I shared the story of the secret message code arranged between Houdini and his good friend magician William Hilliar [read: William Hilliar and the lost Houdini message code]. Houdini wrote the code in a Thesaurus that he gave Hilliar in 1917. Hilliar showed the message to no one, and after his death, the book with the message was lost...until now.

Turns out Hilliar did not keep the book under lock and key as he claimed. After Hilliar's death in 1936 it remained at The Billboard offices in New York where it was used as, yes, a thesaurus! That's when collector John Braun visited the office.

In 1973, Braun sent a letter to his friend Robert Lund, founder of the American Museum of Magic in Marshall, Michigan. In it he wrote:

Years ago, before THE BILLBOARD moved from their old office to Opera Place in Cincinnati, I stopped in to say hello to Bill Sachs, and saw a well-used looking thesaurus gathering dust on the window sill. Houdini had given it to his good friend Bill Hilliar and autographed it in leadpencil Dec. 2, 1917. It's still useful as a thesaurus, and I have one. I'm sure you do too, but this, in collector's language, is an "Association Item," I believe. I will not sell it, but I'll give it to you if you want it! Let me know. Bill gave it to me!


It's clear Braun did not understand the significance of the message inside the book. But apparently Bob Lund did. He never put the book on display in his museum. Instead, he kept it locked away and never showed anyone the secret message. At one point he considered offering a prize for anyone who could divine the message within.

Lund passed away in 1995. It's unclear if his wife Elaine (who was born in Grace hospital in 1926 on the day Houdini was admitted) understood the significance of the book. It was soon swallowed up in the massive museum archives where it remained unseen for years.

Then in 2006, a researcher (who wishes to remain anonymous) rediscovered the book. He came to understand the significance of the inscription and took photos. But as far as anyone at the museum knew, it was just another signed Houdini book. It was even displayed for a period of time in the Houdini exhibit. But when I visited the museum in 2015, the book was gone.

In August I received a friendly email from the researcher who had discovered the book in 2006. Fearing that "everything has been separated" and "history may get lost," he felt the time was right to tell the story and show the world the secret code. And what better day to do it than on the 90th anniversary of Houdini's death.

Here is the Houdini-Hilliar message code: A you can see, Houdini has written "Semper Idem" (sometimes spelled "Eadem"). This is a Latin phrase meaning "Always The Same." It was also the motto of the first Queen Elizabeth. Possibly this connection to England held private meaning for Hilliar and Houdini (Hilliar was English).

If you click to enlarge the image, you can also see that the message does indeed look like it's been traced over in pencil, so that part of Hilliar's strange tale, in which he claimed the message vanished after Houdini's death, seems to hold up. Luckily for us, the message has not vanished again and remains for all of us to see today.

And what does Houdini think about his code returning on this day? Click below and believe.

Honoring
HARRY HOUDINI
on the
90TH ANNIVERSARY
OF HIS DEATH
October 31, 1926

UPDATE: Halloween postscript.
Written by John Cox at 10:26 AM