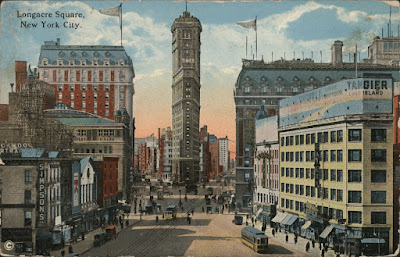 Houdini and New York's Times Square share some interesting history. I've already blogged about how police prevented him from doing a suspended straitjacket there in 1916. And how he finally pulled it off in 1917. But Houdini's first outdoor stunt in Times Square is rarely mentioned in biographies, so I thought I'd take a look at that one today.
As with most of his outdoor stunts, Houdini presented them as challenges. On July 22, 1912, the New York Times announced the following. 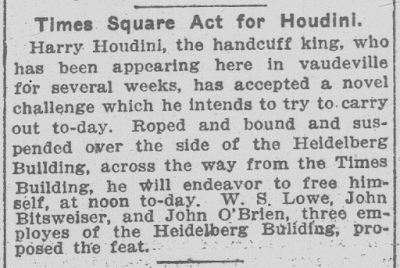 Built in 1910 on the former site of the Metropole Hotel on Broadway and 42nd Street, the Heidelberg Building was a seven story Gothic style office building topped with an 11 stories high tower of scaffolding intended for advertising. This was a bold new idea at the time. But advertisers feared a sign that high could not be seen from the street, so signs rarely appeared on the tower.
It was on this tower that Houdini did his escape, although it did not go unnoticed by the police. Again, the New York Times tells the story. 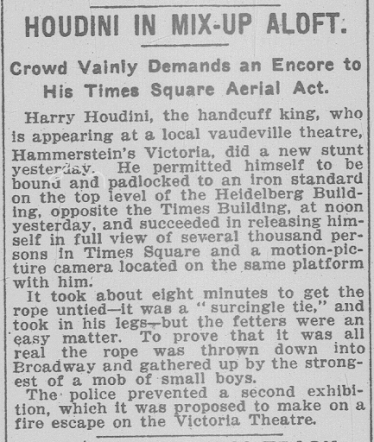 According to the Times article, the stunt was filmed. While this footage has never surfaced, photos do exist. On page 10 of Houdini: A Pictorial Life by Milbourne Christopher are four photos that, while not credited as such, are almost certainly the Heidelberg escape. 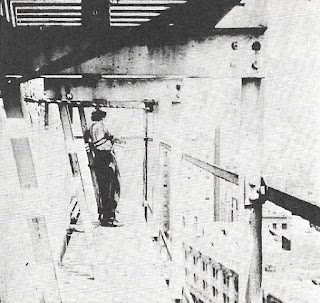 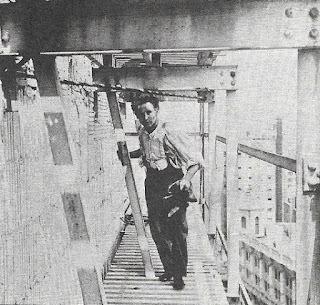 This escape is interesting in that you can see in it the genesis of Houdini's suspended straitjacket escape, which would become his main outdoor stunt starting in 1915. I also like that Houdini could see the value of Times Square advertising scaffolding even when advertisers could not. Always ahead of his time!

The Heidelberg Building stood until 1984 when it was demolished to make way for new development. The site is now occupied by the 49-floor Times Square Tower.

Houdini's last outdoor stunt in Time Square was a suspended straitjacket escape from the Palace Theater in 1922. This is another feat that doesn't get much attention in biographies. That escape and the zany newspaper coverage I'll share next time I circle back to Houdini in Times Square.