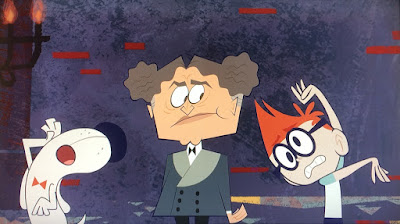 The show is pretty manic, but the Houdini storyline is fun. Harry starts off as an unsuccessful and overbearing "show off" magician (who bares a striking resemblance to Criss Angel). With the help of Mr. Peabody and Sherman, he transformers into the iconic magician of history. We even get to see him do his thumb racket!

Houdini is voiced by Jeff Bennett. The show was written by Mike Leffingwell.

The series is now airing on the Universal Kids TV network, but all four seasons are available on Netflix where this episode premiered on April 21, 2017.

Below are links to some other Houdini animated adventures.