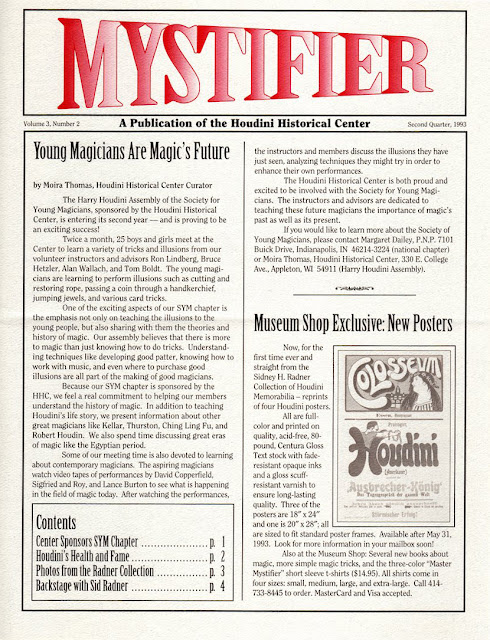 The Second Quarter 1993 Mystifier begins with an article by HHC Curator Moira Thomas celebrating the second year of The Harry Houdini Assembly of the Society of Young Magicians. Says Thomas:

Because our SYM chapter is sponsored by the HHC, we feel a real commitment to helping our members understand the history of magic. In addition to teaching Houdini's life story, we present information about other great magicians like Kellar, Thurston, Ching Ling Foo, and Robert-Houdin.


The newsletter goes on to announce that four new poster reproductions, struck from originals in the Radner collection, are now available for purchase in the gift shop (one is pictured on the front page above). This is followed by an extended excerpt from Zen Karate by Randall Bassett called "Houdini's Health and Fame." In the introduction to the piece, Dr. Morris Young writes:

In his book, Randy cites Houdini as a prime example of someone who developed the physical and mental concentration necessary to acquire advance karate skills. During his research, the author questioned me about Houdini and examined the Houdini diaries which the Bernard Ernst estate has retained from the magician's estate.


This is, as far as I know, the first time Houdini and karate have been linking. And how about that confirmation that Houdini's diaries are still held by the Ernst estate? [Shhhh.] Page three features a section of photos from the Radner collection. While familiar to us today, these images would not have been as familiar to 1993 readers.

In his "Backstage with Sidney Radner" column, Sid discusses his belief that, had he lived, Houdini would have launched a new crusade exposing the tricks of professional gamblers. Sid talks about his own exposures of cards cheats while he was with the Criminal Investigation Division (CID) of the U.S. Armed Forces. He then goes on to say that a special steel engraved panel commemorating Houdini will be placed on a wall at Ellis Island in New York, thanks to the efforts of HHC menber Paul Rosen of Lawrenceville, N.J. (Except the Weiss family came through Castle Garden in Battery Park, not Ellis Island.)

In this extra long column, Sid announces the publication of Manny Weltman's important work, Houdini: Escape into Legend, The Early Years 1862-1900. He also tells of how Hardeen got his nickname "Dash" (at least the story Hardeen told him); that David Copperfield recently did a suspended straitjacket escape over fire; and that bottles of "Houdini Beer" are now collector's items as the Appleton based brewery that produced it has lost in least.