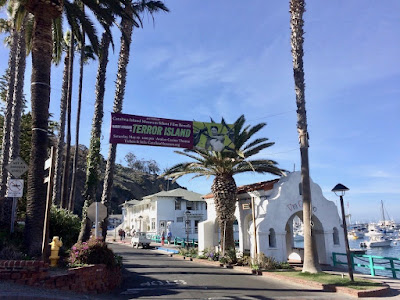 Next Saturday, May 19, you'll have the unique opportunity to see Houdini's 1920 movie Terror Island on Terror Island itself (aka Catalina Island).

The Catalina Island Museum in conjunction with the 31st Annual Silent Film Benefit will screen Terror Island in Avalon's historic Art Deco Casino with live orchestral accompaniment by award-winning composer and sound designer, Michael Mortilla & The Accompanists. The screening is at 1:00 pm and tickets can be purchased HERE.

There will also be special pre-screening Magic Show with magician and noted Houdini impersonator Jim Bentley. Jim will be doing several signature Houdini feats, including a straitjacket escape. The pre-show is for museum members only, but memberships will be available at the door.

As a bonus, the Art Deco Society will be holding their annual ball that night, so expect to see the island swarming with people in period dress -- just like the days when Houdini was there! And, of course, Houdini: Terror on the Magic Isle, an exhibition devoted entirely to Houdini's 1920 movie, is currently on show at the Catalina Island Museum and is a must see.

Catalina Island can be reached using the Catalina Express, which runs boats to and from the island all day long. I'll be attending the May 19 events along with a pack of fellow Houdini nuts. Hope to see you there! 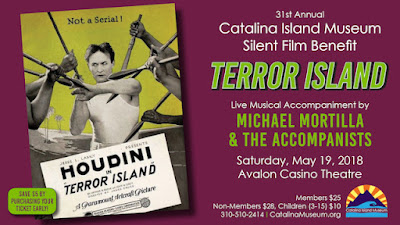 UPDATE: This won't be the first time Terror Island has screened on Catalina. As you will learn in the museum's exhibition, Terror Island played at Catalina's Strand Theater during its initial release in 1920. Last weekend Joe Notaro found the location of The Strand. Check out Joe's report HERE.