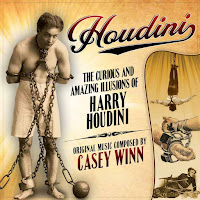 Houdini: The Curious and Amazing Illusions of Harry Houdini is a selection of original music by Casey Winn inspired by Houdini's life. Among the 15 tracks are: Houdini Overture, The Manacled Diver, The Death and Resurrection Show, Film Star, and Magician Among the Spirits.

This was released in 2013. Individual tracks or the full MP3 Album can be purchased at Amazon.com and Amazon.co.uk. There you can also sample each track.