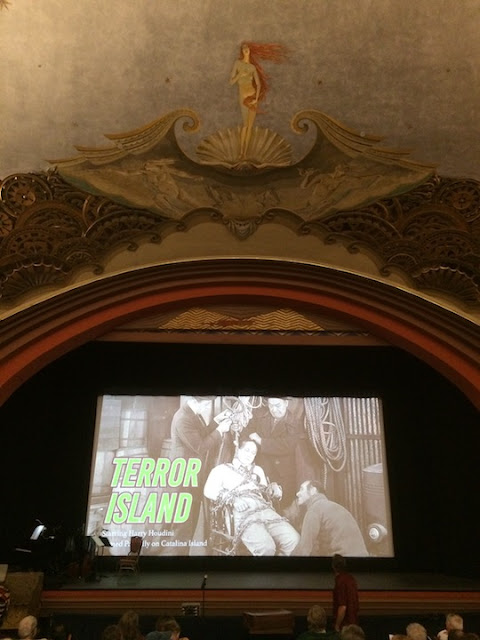 On Saturday, May 19, Houdini's Terror Island screened with live musical accompaniment inside the historic Art Deco Casino Theater on Catalina Island, where the movie was filmed 98 years ago. The event was a triumph! The movie played beautifully before a large crowd who gave the musicians a standing ovation (or was that for Harry?). The event was put on by the Catalina Island Museum in conjunction with Catalina's 31st Annual Silent Film Benefit, which ranks as one of the longest running celebrations of silent film in the world.

The day kicked off inside the historic 1929 Catalina Island Casino with a special brunch for members of the Patrons Society. As a lender and advisor to the museum's current Houdini: Terror on the Magic Isle exhibition, I was invited along with fellow lenders Joe Notaro, Mark Willoughby, and friends Joe Fox and Lisa Cousins (Houdini nuts all!). As I didn't have to do any speaking at this event, I was able to enjoy a few mimosas! A great way to start what would be a full day.

After brunch we settled into the stunning 1,184 seat auditorium to enjoy a special magic pre-show by Jim Bentley. Jim, as we all know, has a long career playing Houdini in stage and television. I was disappointed that he did not perform in character, which I believe was the expectation and certainly would have fit the event. But he did do a straitjacket escape on stage, which was a treat to see in the time capsule that is the Avalon Casino. 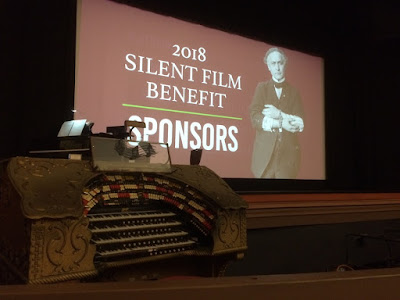 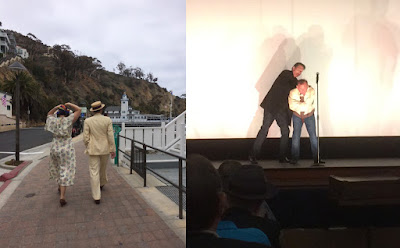 The doors were then opened to the public and a large crowd filled the auditorium. This happened to also be the weekend of the Art Deco Society's Annual Ball, so some people came dressed in period clothes. One gentleman wore a pith helmet! Houdini nut Stacey Zimmerman, who had traveled from Florida for the event, arrived in a vintage Harry Harper-like mohair sweater, which everyone instantly recognized and was the hit of the day!

Julie Perlin Lee, Executive Director of the Catalina Island Museum, opened with a speech, thanking all the attendees and contributors and provided some nice background on the movie. She then introduced award-winning composer and sound designer, Michael Mortilla, who in-turn introduced his accompanists: Nicloe Garcia, Frank Macchina, and John Krovoza. These are highly accomplished musicians who would perform some real magic on the movie. You can read more about them in the below pages from the very nice 36-page event program. 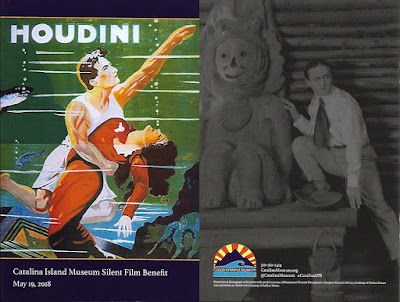 I had been sitting near the front for Jim's show, but I decided to relocate to the back of the auditorium for the movie. I like to watch the audience watching a Houdini movie. The lights went down with a star-field effect arching over the huge domed ceiling (very art deco!), and from the darkness Houdini returned to Catalina Island.

Now, I've seen Terror Island with audiences both large and small on several occasions, and it plays...okay. It's not a sure fire winner like The Grim Game, but it's also not a slog like The Man From Beyond. But with the beautifully performed and perfectly timed live score, Terror Island came to life as I've never experienced before. The audience seemed entirely involved; they laughed and gasped in all the right places, and when the movie ended, they gave the musicians a standing ovation. I couldn't help but think this was the celebratory premiere event that the movie never had in 1920. It was truly magical. Congratulations to everyone who made the event such a success.

But that wasn't the end of our day's adventure. After the screening, we went to see the nearby ruins of the Hotel St. Catherine, where Houdini stayed when he filmed Terror Island in November 1919. We also took photos overlooking the rocky shoreline where Houdini famously was "buffeted about like a cork" in the high surf as he tried to rescue a crippled camera boat. The dramatic episode is well chronicled in the museum's Terror Island exhibition, which is where we all headed next.


After we spent a good hour in the exhibit (which I covered here), and another hour sitting talking Houdini in the open air patio, Julie Perlin Lee brought us into the museum's work rooms to share with us two new Houdini discoveries, both having to do with the above mentioned rescue incident.

First up, assistant curator Jessica Zumberge played us an audio excerpt from a 1976 interview with Stephen "Squirrel" D'Arcy, who manned the rescue boat that succeeded where Houdini had failed. D'Arcy remembered Houdini, director James Cruze, assistant director Vernon Keys, and the making of the movie on the island. But neither he nor the interviewer (Chuck Liddell) could recall the name of the film! It's a remarkable piece of recorded Catalina-Houdini history.

Julie then showed a recently discovered scrapbook belonging to the other rescuer, Tinch Moricich. Inside was a newspaper clipping from the Los Angeles Examiner, which up until now only existed as a poor quality xerox in Pat Culliton's The Tao of Houdini. But here at last was the original with a very clear photo of Houdini in the rocks. I believe an effort is going to be made to add both these finds to the exhibition. 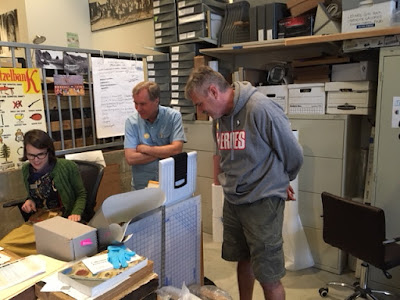 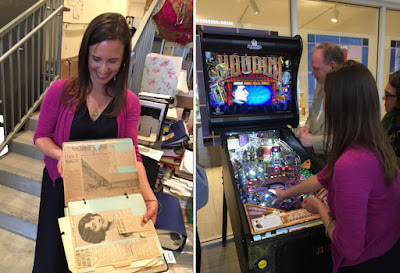 Another surprise is that the museum now has on-site the new Houdini pinball machine. It's currently set up in the lobby and is very popular! There were a pack of kids playing it the entire time we were there. But as it was now after hours, Julie removed the glass so we could hand trigger the movie modes with hopes seeing the Terror Island features. This proved to not be so easy! But eventually we were able to view the movie clips (and more) and we all enjoyed taking turns playing the game itself. It's a blast!

Somehow the entire day had escaped without time to visit the sites of the Terror Island crew hotels and the Strand Theater, so that will have to wait for the next trip. As the sun set and people in period dress made their way to the Art Deco Ball, we boarded the boat back to Long Beach with the memory and music of Terror Island playing in our heads. It was another magical day on the Magic Isle. 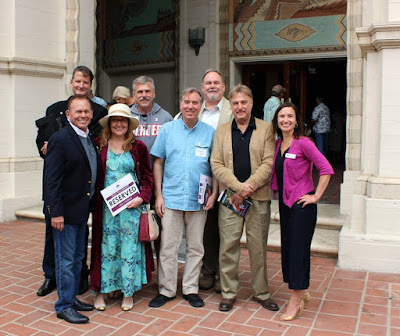 Check out the Catalina Island Museum website or Facebook for details about the ongoing Houdini: Terror on the Magic Isle exhibition and their upcoming magic-related events, such as a screening of Houdini (1953) on June 1st and Death Defying Acts later this summer.

Thanks to Stacey Zimmerman for the use of two of his photos. Also check out Joe Notaro's report on the event at Harry Houdini Circumstantial Evidence.