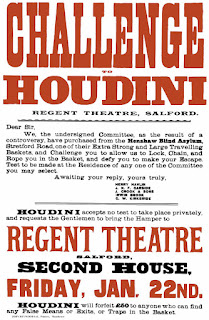 Currently my New Houdini Chronology project shows listings for where Houdini performed during a given week along with select escapes, such as bridge jumps and jail breaks, and notable events, such as the Margery seances, etc. But I've now decided to "kick it up a notch" and include all the Challenge escapes that Houdini faced during his engagements. Here's a taste from 1906:

Happily, Houdini's many challenges are well documented with handbills and newspaper advertisements. Of course, this means going back under the hood (and back into newspapers.com) in a major way, but that's the fun!

I hope to have a fair amount of Challenges worked into the chronology when I offer my next batch of sample years.
Written by John Cox at 10:44 AM