The Girl Who Handcuffed Houdini takes the stage 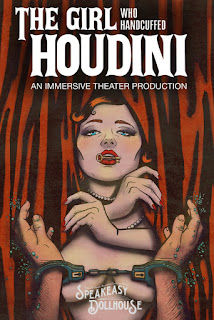 An Immersive Theater Experience based on Cynthia von Buhler's graphic novel The Girl Who Handcuffed Houdini begins TODAY at Theatre 80 in New York City. It's presented by Speakeasy Dollhouse and runs through November 10, 2018.

Written and directed by Cynthia von Buhler, the play stars Pearls Daily as Minky Woodcock, Vincent Cinque as Houdini, and Robyn Adele Anderson as Bess. Below is a description of what sounds like quite an experience!

Audience members will witness Harry Houdini’s final days through an immersive theater experience in which they are assigned a character to follow and then view events through that character’s point of view. They might find themselves attending a séance, helping the magician rehearse backstage, sipping absinthe in a speakeasy, spying on an affair in a hotel room, witnessing an attempted murder, visiting Houdini in his hospital room, or viewing his body in the morgue. All attendees “travel via train” to watch Houdini’s final month of performances, including his iconic Water Torture Chamber act, in Rhode Island, Montreal and Detroit. VIP guests follow Harry Houdini or Minky Woodcock, receive the best seats in the house for the stage portions of the show, and are invited onstage to inspect the Water Torture Chamber. Audience members are encouraged to come back again to follow other key players and see alternate facets of what actually led to Houdini’s fateful death. Evidence is revealed, but the truth is left up to the theatergoer to decide.


All full price tickets include a signed copy of the collected hardcover edition of The Girl Who Handcuffed Houdini. For more information and showtimes visit the official website.

It's also announced today that Minky will return in a second graphic novel series, Minky Woodcock: They Die Fast on Broadway, in which she will investigate the real-life death of Olive Thomas, whose murder was one of the earliest Hollywood scandals.