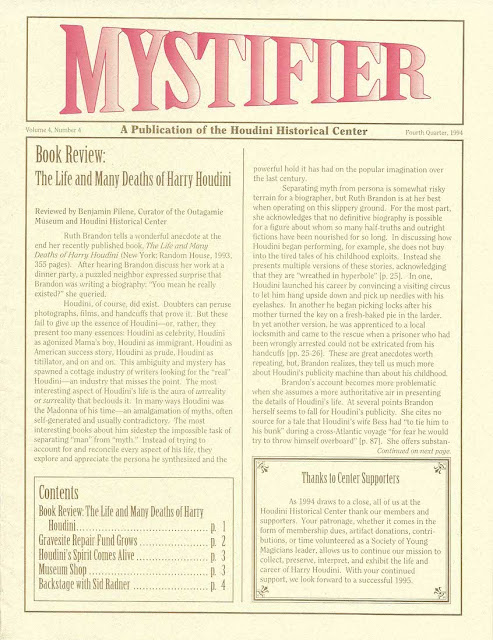 New HHC curator Benjamin Filene kicks off the Fourth Quarter 1994 Mystifier with a review of The Life and Many Deaths of Harry Houdini by Ruth Brandon. It's a well-researched and considered assessment of what would prove a controversial biography. Filene does give the author credit for "considering the psychology behind his stunts," but says her "analysis becomes more erratic" when she shifts to "the psychology of the man himself." In the end, Filene concludes:


The Life and Many Deaths of Harry Houdini does offer a creative and, for the most part, well-argued look at a figure in need of a fresh interpretation. In the tradition of Houdini himself, Brandon should be commended for not being afraid to take a chance and for executing her maneuvers with style. She could, though, stand to learn more from the master about which challenges to accept and which to graciously let pass.


The newsletter only runs four pages this time. Filling out page 2 is is an update on the Gravesite Repair Funds, noting that $7000 has been raised. But it also says "repairs to the family grave are on hold for the immediate future, according to George Schindler, a trustee of the S.A.M. Parent Assembly #1." This, we now know, was the start of friction between the cemetery and the S.A.M. which, thankfully, is now in the past.

A report on a live Halloween radio broadcast from the HHC by Rick McNeal and Len Nelson of WAPL in Appleton follows. It says the DJs received their own "message from beyond" about the Green Bay Packers. The museum shop reports that it has in stock the graphic novel Batman/Houdini: The Devils Workshop and Harry Houdini: Legend and Legacy by Roger Wood and Brian Lead. Familiar names listed among the "New Members" are Lee Jacobs and Geno Munari.

Sid Radner devotes his "Backstage" column to that year's Official Houdini Seance, held at the Soldiers’, Sailors’, Marines’, Coast Guard and Airmen’s Club in New York City. Attendees included Stanley Palm, Maureen Christopher and Kenneth Silverman. Co-organizer Tom Boldt could not attend that year, but his wife Renee and her mother, Suzanne Goral, attended in his place. Houdini, as usual, was a no show.

Sid then reproduces in full an article about the seance by Barbara C. Bernard from the November 28, 1994 issue of the Union-News in Springfield, Massachusetts.