'After Houdini' launch party at the Houdini Museum of New York, October 4

The Houdini Museum of New York will host a launch party for Jeremy Holt's new graphic novel After Houdini on Thursday, October 4, 2018 from 6-9PM. 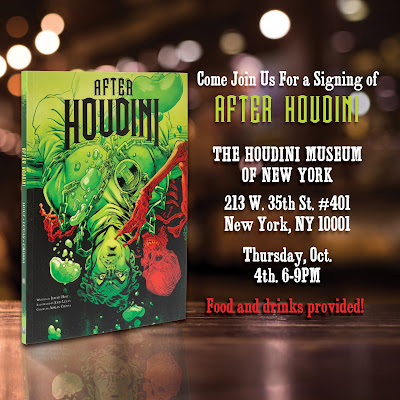 Insight Comics is proud to present the debut of AFTER HOUDINI, hosted by The Houdini Museum of NYC!

Written by Jeremy Holt, art by John Lucas, and colors by Adrian Crossa, Holt will be available for a meet-and-greet to sign copies.

The event is from 6-9PM, food and drinks provided! RSVP on Facebook.

After Houdini will be officially released on October 9th and is available to pre-order at Amazon.com (U.S.) and Amazon.co.uk (UK). Next year will see a follow-up volume, Before Houdini.