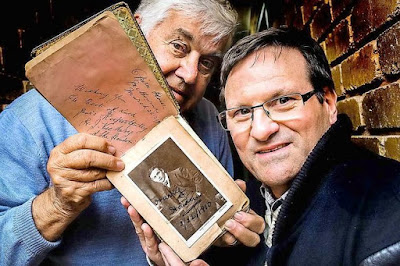 The autograph book is from 1910 and has been in the family of Toolern Vale resident Wayne Johnson for more than a century. Mr. Johnson says the autograph book had been passed down to his wife, Kay, from her great-grandmother.

"Kay's great-grandmother used to live in a hotel and she used to collect the signatures of people who came into the hotel," Johnson told the Star. "A lot of the other entries in there are signed, 'a member of the Houdini company', which also helps to verify the authenticity of Houdini himself's signature."

Houdini spent four months touring Australia in early 1910. During this time he made the first successful airplane flight on the continent on March 18 at Diggers Rest.

Diggers Rest History Project members put out a call for donations to help buy the autograph book from Mr. Johnson. They've raised about $1500 towards the $2000 goal. Johnson said he was keen to ensure that the book stayed "close to home".

"You can't put a value on this," he said. "It's been in the family for generations and I'd like it to stay in Diggers Rest."

The Diggers Rest History Project, which began in 2014, shares its collection of artifacts and historic documents with the community through Houdini's Cafe and the Diggers Rest Medical Centre.