When The Man From Beyond came home 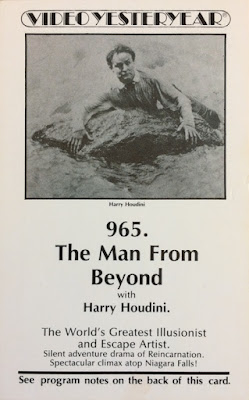 What was the first Houdini movie released on VHS? One might think it would have been Paramount's Houdini (1953). But that famous biopic did not make it onto Home Video until 1991.

The first Houdini movie to appear on VHS was Houdini's own 1922 silent thriller The Man From Beyond. It was released in 1983 by a company that cinephiles of a certain age will remember very well; Video Yesteryear.

Video Yesteryear was located in Sandy Hook, Connecticut, and was the largest catalog retailer of public domain films on VHS, Beta, and 8mm film beginning in 1978. (It started as Radio Yesteryear in 1967.) The company released their silent films at corrected frame rates speeds -- a process they called Video Accu-Speed -- and included original organ scores composed and performed by Rosa Rio, who had been a theatre organist during the silent era. The company was purchased by Audio Book Club in 1998.

The Man From Beyond was the only available Houdini silent movie until 1996 when Bill McIlhany released Terror Island and later The Master Mystery on VHS. The print used for the Video Yesteryear version appears to be the one that's still used today.

Happily, I have one of the original Video Yesteryear VHS tapes. I vividly recall not believing my eyes when I saw this on the shelf of Vidéothèque on Sunset Blvd in the 1980s. The catalog price was $52.95. As with all Video Yesteryear releases, it included program notes written by J. David Goldin. 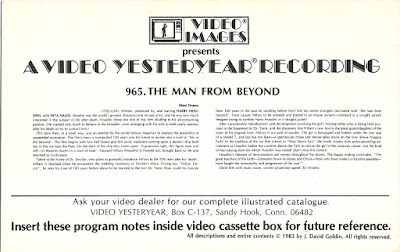 While this remains the only commercial VHS release of The Man From Beyond, it has been released by several companies on DVD and even on Blu-ray. Today it can be found streaming on Amazon Prime.

Email ThisBlogThis!Share to TwitterShare to FacebookShare to Pinterest
Tags: 1980s, Movies, The Man From Beyond (1922), VHS