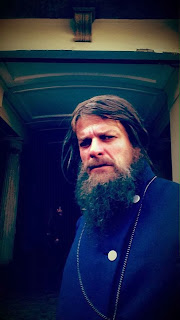 The IMDb page for HISTORY's Houdini miniseries has added to the cast Hungarian actor Iván Kamarás as…ready for it…Rasputin! I've also discovered this photo posted to the actor's Facebook page on Oct 24 which is almost certainly Kamarás in character.

Coincidentally, just last week our friend David Saltman posted on his blog The Houdini File an investigation into whether Houdini was involved in some kind of a plot to undermine Rasputin during an unknown return to Russia in 1913. Will the miniseries dramatize this? Or will the infamous mystic put in some kind of an appearance during Houdini's 1903 Russian tour? Whichever the case, this miniseries certainly seems to be covering a lot of ground!

The 40-year-old Kamarás is best known for his role as Agent Steel in the 2008 superhero fantasy thriller Hellboy II: The Golden Army. He also appeared in the most recent Die Hard movie and in the new Dracula TV series.