Here is an incredible never-before-published photograph of Houdini performing his Water Torture Cell in Scotland that will be on display starting this Saturday, February 25, at the Glasgow Royal Concert Hall as part of the City of Stars Exhibition. The exhibition features 22 photographes from the archives of the Herald and Times newspapers. According to the Herald Scotland, this photo "was taken in 1920 and is the oldest image in the collection." 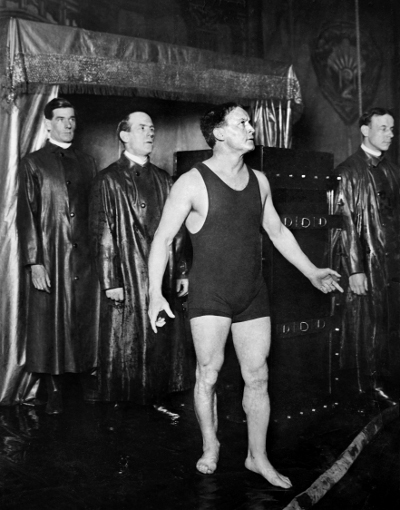 This photograph is a mind blower for several reasons. It shows Houdini apparently emerging wet from the USD on a wet stage, so it's possible this really was taken during an actual performance. We see the assistants Jim Collins and James Vickery in their slickers, and get a good look at the cabinet that was used to conceal the cell during the escape. We also see the cell itself with what appears to be two locking bands wrapped around it. These I have never seen before and they certainly did not survive with the cell.

There are only a handfull of photos of Houdini and his Water Torture Cell. None are like this. This is really an incredible image to suddenly emerge from nowhere after 92 years. Wow!

The good news is this photo can be purchased at the Glasgow Herald website.

UPDATE: As you can read in the comments below, the consensus opinion is that this photo was taken before the escape, not after. The cell appears to be without the stocks, and Houdini and his assistants could be watching as the stocks are being "flown in" via the block and tackle. What a moment of drama it captures! This photo really reveals how powerful Houdini was on stage.

UPDATE 2: You can see how the photo looks on display HERE.
Written by John Cox at 6:36 PM