Houdini buffs have long discussed the question of Houdini's two birthdays. While Houdini celebrated it on April 6, his birth certificate shows he was actually born March 24 (today!). In a letter to Hardeen, Houdini admitted that he celebrated his birthday on April 6 because that's when their mother would write to him. "As SHE always wrote me on April 6th, that will be my adopted birthdate."

But there's another mystery around Houdini's birth that never seems to get discussed. It's the question of why Houdini for the first half of his life claimed he was born in 1873 instead of 1874. When I first started encountering this 1873 date, I would chalk it up to a misprint or isolated error on Houdini's part. But I now see there is consistency in Houdini both using this date and calculating his age during these years. So it appears Houdini really believed he was born in 1873.

This has some interesting implications. Houdini thought he was a full year older during his formative years. So when he made the decision to leave his tie cutter job and begin a career as a magician, he thought he was 18. But he was 17. When he married Bess in 1894, he believed he was 21. He was 20.

So when did Houdini learn the truth?

On his May 26, 1900 passport application, Houdini records his birth year as 1873. But on his application for renewal filed April 15, 1903, he writes 1874 for what appears to be the first time. So what happened between these dates? One pretty significant thing; he went to Budapest.

I think it's possible Houdini discovered his true birth year from records or from relatives during his weekend visit to Budapest with his mother in 1901. However, in his pitchbook, The Life, History and Handcuff Secrets of Houdini, and in his first book, The Right Way To Do Wrong, both published in 1906, he once again gives his birth year as 1873.


But the bigger mystery in all this is why Houdini believed his birth year was 1873 in the first place.

Before I get too deep into the weeds, I need to acknowledge that it could be just an honest mistake. I know it's hard for us to conceive this kind of mistake today, but the Weiss family grew up in a very different world, one without easily accessible records, and dates would be what one recorded yourself or could remember. And when having a child a year, birthdays and even birth years could be confused. Or it could be Houdini, who we know was famously bad at recording dates, was even worse than we think!

But if it was an honest mistake discovered in 1901, why does Houdini continue to use the wrong date in his publicity material? This suggests there might be something more to this.

Now, I do have a theory that gets us into some pretty provocative territory. These are thoughts I've had for a while, but have not shared. This is pure wild speculation on my part, but hear me out.

Houdini's sister Gladys once stated that Houdini/Ehrich was named after an earlier baby who had died. This remarkable claim appears in a letter she wrote to Bess in 1936, reproduced in full in The Houdini Birth Research Committee's Report (1972). She writes:

There was an infant son Ehrich of our household, at that time. This babe through a fall, died and broke the hearts of both our parents. Both of them said, if ever another son were to be their blessing, his name would be Ehrich.


No other evidence of this earlier Ehrich has surfaced, and in the next sentence Gladys says Houdini was born in Appleton. So she might be doing some myth making here. But it seems odd for her to be doing so with Bess, and she also writes, "I'm sure you have heard mother tell you all this before." So this seems like information that was well known among family members.

So if we take Gladys' word for it, could this earlier Ehrich have been born in 1873? Could he have been born on April 6, 1873!? Could Houdini's mother have confused the birth years of the two Ehrichs? Or, and this is where it starts to get strange, could the heartbroken Cecelia have been such a believer in reincarnation (as Houdini later said he was) that she decided her new Ehrich was the old Ehrich and that he was spiritually "born" in 1873 and wanted to honor that. 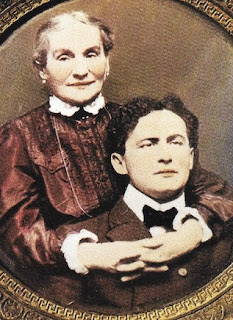 In the same letter that Houdini admits to April 6 being his "adopted birthday", he writes: "It hurts me to think I can't talk it over with Darling Mother." Could his mother's clinging to the trauma of the earlier Ehrich and her strange transference onto Houdini be what they needed to "talk over"?

This also helps explain the pitchbook and The Right Way To Do Wrong. Having discovered the truth in 1901, Houdini recorded his real birth year in official records. But for the public record, one that his mother might read, it remained 1873 for HER. Tellingly, the 1914 edition of his pitchbook, published after her death, his birth year is updated to 1874.

Is your head swimming yet? Here's one final bit of Freud for you.

If there was an earlier Ehrich who died in an accident, might it explain the extreme attachment Cecelia had for her second Ehrich. Might it also explain Houdini's drive to become a "death defier" -- compulsively acting out his own death and resurrection to delight his mother and heal the grief caused by "his" original failure to escape death. Recall his famous diary entry after his Rochester bridge jump in 1907: "Ma saw me jump!" Might this be the key to Houdini's psyche?