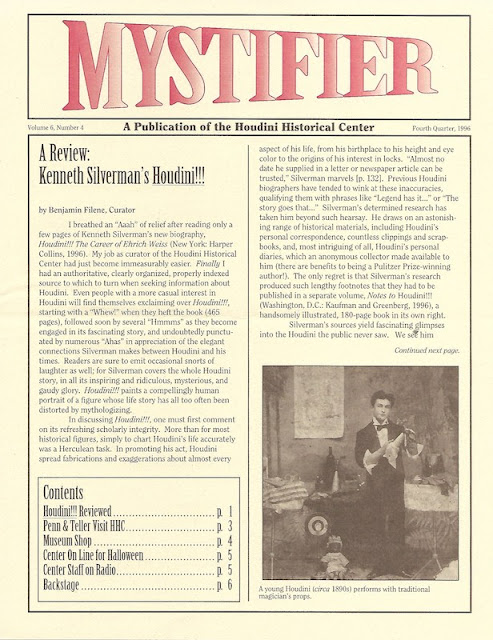 The Houdini world experienced a peak moment in the Fall of 1996 with the 70th anniversary of Houdini's death and the release of Houdini!!! The Career of Ehrich Weiss by Kenneth Silverman. The Fourth Quarter 1996 Mystifier captures this time, starting with a rave review of the book by HHC curator Benjamin Filene.

I breathed an "Aaah" of relief after reading only a few pages of Kenneth Silverman's new biography Houdini!!! The Career of Ehrich Weiss. My job as curator of the Houdini Historical Center had just become immeasurably easier. Finally I had an authoritative, clearly organized, properly indexed source to which to turn when seeking information about Houdini.


This newsletter also contains a report on Penn and Teller's visit to the HHC on October 16. The magic duo were performing in nearby Green Bay, Wisconsin. They also sat down for a quick interview, which includes the following intriguing exchange:

Penn: We've talked to three people who saw Houdini perform, They all came up to us after seeing our show––they were all in their eighties. They mentioned it because Teller does the needles and they mentioned seeing Houdini do the needles. All three said the exact same thing––that they found [Houdini's] shows kind of disappointing. The Vanishing Elephant was supposed to have really stunk. But you know, it was the excitement of going and being part of it.

Teller: Although I'm convinced very much by [Kenneth] Silvermans's description of the water tank [the Water Torture Cell] that it was a really fine piece of theater, just a killer piece of theater. It was paced completely differently from the way we should see something nowadays, but certainly within the realm of an event in that time.

Penn: I'm afraid I can't be accused of having any sense of how the performance was in its time. I'm just ruined for that––it's like reading Dickens. So all I have are the accounts of these three people that saw him. Of course, once you've seen something big like this, once you've seen Houdini, you have two choices: either it was the best thing you've ever seen or a disappointment. You don't really have any sort of middle ground.


The newsletter continues with a report on radio interviews conducted by HHC curator Benjamin Filene on Halloween, as well as the Halloween AOL online conference co-hosted by Filene and D.L. Shiloh. It reports that "at any given second as many as 60 to 80 people hand 'logged on' to the conference." The article provides a URL of where a transcript can be retrieved, but the link has long since died. But a new age of online Houdini information had begun!

In his "Backstage" column, Sid Radner offers a ringing endorsement of Gene Gamache's new documentary, Houdini People Came to See Him Die, saying he feels it is "the best one to date." He also offers praise for the Silverman book, saying: "This biography surpasses everything written previously about Houdini, and no magic buff should be without it."

Sid then alerts readers that the first HHC publication, Houdini Comes to America, is now available from the museum shop. He also corrects a statement he made in a previous newsletter that Houdini had no nieces. "My statement was true, but Houdini did acquired nieces through his marriage with Bess, and his niece Marie Blood is well known in the magic profession."