A special movie at a magical place 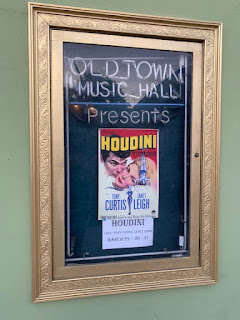 Last night I had the great pleasure of seeing Houdini (1953) at the historic Old Town Music Hall in El Segundo (near LAX). While the movie was a joy as always, the real surprise was this incredible venue. How have I not known about this place until now?

The Old Town Music Hall is a genuine silent movie theater built in 1921. Restored in 1968 by musicians Bill Field and Bill Coffman, the theater (a non profit) is a time capsule that offers up an authentic movie going experience from another era. The true star of the show is the massive 1925 Mighty Wurlitzer wind-powered pipe organ. Last night the evening kicked off with musician Edward Torres playing several numbers on this incredible instrument. This was followed by a sing along accompanied by authentic silent era lantern slides. The theater does this before all their movies, and it really conjures a starry dream-like experience worth the price of admission alone. If you want to know what it was like to live in Houdini's time, this is pretty close to finding that magical time machine.

Then came a raucous Laurel and Hardy short, Come Clean (1931), featuring Mae Busch as a suicidal mad woman giving the boys a very bad day. Of course, Mae also appears in Houdini's The Grim Game. Was this clever programing on the part of the theater? Nope. Just a coincidence. But a delightful coincidence, and Mae is terrific in the short.

After a brief intermission it was time for Houdini! What can I say? I never tire of watching this wonderful film, and every time I see it projected with an audience I have a somewhat different experience. This time the sheer star power of Tony Curtis and Janet Leigh really jumped off the screen at me. They are electric. I also always find new details within the movie itself. This time I noticed something in the scene at 278 (er, I mean, 273) when Harry says to Otto, "If the press won't come to me I shall go to the press." At that moment, Otto is threading up a movie projector. A nod to the films Houdini made of his outdoor stunts maybe? Also, in the early scenes in Mama's house, there is something on the back of Harry's bedroom door that appears to be in German. Possibly an acknowledgment of the Weiss family's native tongue? (At last year's screening on Catalina Island, I noticed menorahs in the house.) 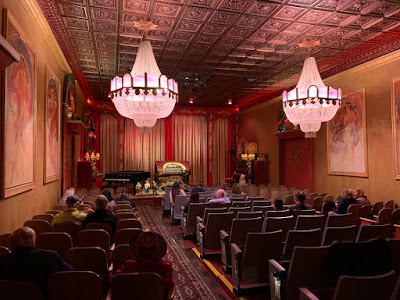 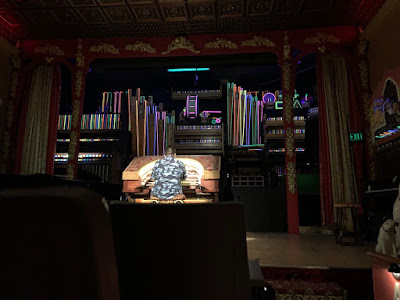 After the movie, there was an attendee doing some impromptu magic in the lobby for people who had lingered. He mentioned that Houdini himself made silent movies, but couldn't recall the names (and I didn't want to pipe up). This caught the attention of the organist who said he had no idea Houdini made movies. Oh???? I'm hoping this might have planted a seed and we'll see a Houdini movie playing at the Old Town Music Hall one day.

Houdini is showing again today at 2:30pm, and I'm tempted to go back. I know I'm going back for their screening of Animal Crackers next month. Not that there's much connection between The Marx Brothers and Houdini (apart from this). I just want to once again time travel back into that magical twilight world I experienced last night. 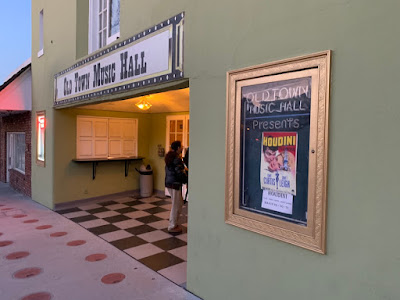