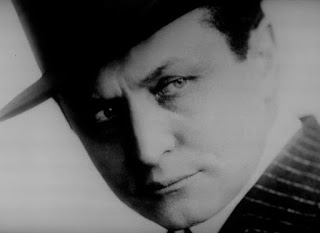 You would be hard-pressed to find many bad reviews of Houdini. Houdini's act, throughout his career, drew uniform raves. But here's a review of Houdini at the Library Theater in Warren, Pennsylvania that's absolutely scathing! This comes from The Warren Tribune, Feb. 21, 1924. This review is so bad, it makes one wonder if there's something else going on here. Well, there is, but I'll tell you after you read.

So what prompted this? The first thing to know is this isn't a review of Houdini's vaudeville act. This is a review of one of his very first spiritualism exposé lectures. In its earliest form, Houdini included a handful of signature tricks at the end of his talk, including the Milk Can (the "tank" referred to here).

Of course, you would never know this as the review makes no mention of his lecture. And that's telling. I expect this was written by someone with pro-spiritulism sympathies, and they set out to do an "exposé" of their own. But the idea that an assistant went into Houdini's cabinet to free him from his Milk Can is silly.

While this particular review feels like a hit job, Houdini did receive some legitimately tepid reviews for his early lectures. This was because many venues simply advertised an appearance of Houdini without mentioning the nature of that appearance. The Warren engagement was promoted as "An Evening of Thrills and Surprises" as you can see below. 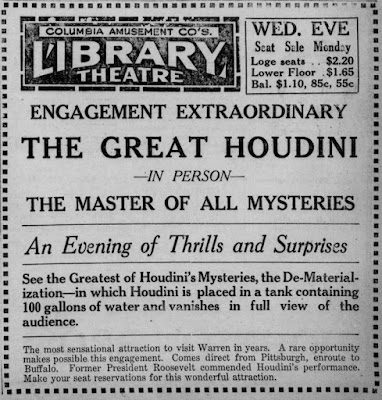 This led to some confusion and, yes, disappointment when Houdini spent the vast amount of the evening talking about spiritualism. A review of his talk in Greenville, SC, on March 6, 1924 made this point:

While the Houdini show was good, it might be said that it was not exactly so well received as many persons had expected. Apparently the audience wanted more tricks and stunts--wanted to be entertained with such, instead of being administered a lecture on a subject which smacked keenly of the highbrow variety.


It wasn't long before Houdini dropped the magic and escapes and clearly advertised that he would be giving a lecture: "Can the Living Communicate with the Dead?" Good reviews followed.