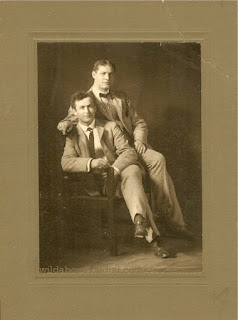 On this 85th Anniversary of the death of Houdini, NRP (National Public Radio) has posted an interview George Hardeen, the grandson of Houdini's brother, Theo. Hardeen, and a member of Houdini's bloodline who has, until now, remained almost totally outside the spotlight.

It's a terrific segment by Daniel Kraker, and George Hardeen sounds like a solid guy. I especially love when he says that Houdini's DNA is now flowing into the Navajo Nation. Also, the recording of Houdini's voice played during this segment (at 3:23) is the different recording that was recently played at EMC 2011. My jaw hit the floor when I heard this!

I'm honored to say I was asked by NPR to help out on this segment. I was able to clarify some information and provided photos from my own collection (one of which you see here). Got a nice credit for myself and the blog. :)

Click below have a read or a listen at NPR.org: